There was no 'meeting' for what happened in Cape Town: Darren Lehmann

There was no 'meeting' for what happened in Cape Town: Darren Lehmann

Lehmann said there was no large 'meeting' as such where any plans were devised to alter the condition of the ball.

Darren Lehmann, the former Australia coach, under the tenure of whom the infamous ball-tampering scandal broke, has rubbished claims of any meeting held for what transpired in Newlands, Cape Town in March earlier this year.

During the third Test against South Africa, Steve Smith, the then-Australia captain, David Warner and Cameron Bancroft strategized altering the conditions of the ball. A visual of Bancroft was captured catching him dumping sandpaper – later admitted to being used to rough up one side of the ball to get more swing – down his trousers in the afternoon session. Lehmann, who was exonerated from having anything to do with the incident, said there was no large meeting as such where any plans were devised.

“Cape Town has a couple of dressing rooms,” Lehmann cleared. “There was no meeting as such. That s rubbish. You can mix and mingle and there is a lunch room out the other side and there are people out the front, then there s people in the viewing room.

“It was not like that at all. There were guys just having a quick discussion and (they) just went with it. It wasn t all of us either. It was just a couple of guys having a chat and just doing it. It was disappointing that it happened like that. You wouldn t know what they were chatting about.”

In the aftermath of the incident, Lehmann resigned as the head coach but called his tenure with Australia the “best job in the world,” though at the same time, the former batsman admits that being away from it has allowed him to enjoy time with family.

“I am sad to leave that job, but I probably coached a little too long to be fair,” he said. “You are talking 300 days away a year. If you put it in AFL or NRL terms that is 10-year NRL or AFL (coaching) career. You are never home, you never see your kids. It s 24/7. You love it, but you are never sleeping and you are always worried about one of your blokes doing something wrong.”

Lehmann expressed his desire to give coaching another go somewhere down the line. 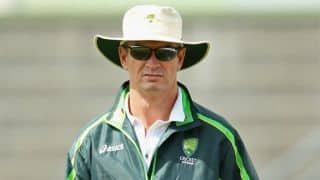