Joe Denly set his eye on sealing an Ashes berth and has moved on after failing to make the cut in England's final squad for the ICC World Cup.

Joe Denly set his eye on sealing an Ashes berth and has moved on after failing to make the cut in England’s final squad for the ICC World Cup 2019 that gets underway from Thursday.

Denly was part of a provisional squad but following a wicketless outing in an ODI series against Pakistan during which he played two matches, he was dropped in favour of left-arm spinner Liam Dawson.

Putting up a brave face, the 33-year-old says he has now refocused himself on performing in county cricket to put a strong claim for Ashes in August.

“There s no point in me moping around,” Denly told BBC. “I ve got to get on with it now and I m looking forward to putting in some performances for Kent and getting some County Championship runs under my belt.”

Dawson forced his way taking 18 wickets and averaging 45 with the bat for Hampshire guiding them to One-day cup final.

Denly said Dawson deserved the call-up. “Before I got the call, I knew that was an avenue they could take and I was fully prepared for it. Liam Dawson is a fantastic cricketer and deserves his selection,” he said.

He added, “I ve got to get on with it now and put in some performances. There s a lot of cricket between now and the Ashes, so my focus is performing well for Kent and if that happens hopefully the Ashes selection will take care of itself.” 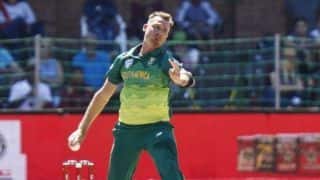