The onus is on the Indian selectors to think out of the box. This is the time for India to experiment, especially in the T20s, writes former India cricketer Yajurvindra Singh.

The Indian guns are all set, ready and aimed towards the T20 World Cup to be held in Australia later this year. India start their campaign at the famous Melbourne Cricket Ground on October 23, 2022. Their rivals are no other than their most undesired opponents, Pakistan. India will naturally be gunning for revenge, especially as in 2021 in the UAE they lost to them.

Although India did win the inaugural T20 World Cup in 2007, they have not been able to repeat the feat ever since. The problem that seems to surface is in the selection of the side. The confusion that arises is whether to play the tried-and-tested players or ones who are relatively less experienced. In the turmoil of this thought process, the Indian selectors fail to get the right combination in place.

The Indian cricketers are well versed and familiar with the T20 format. The Indian Premier League (IPL) has been the successful platform on which most of them have gained immense experience and knowledge. The IPL has been a boon for Indian cricket, especially in the emergence of several unknown talented cricketers. The tournament has thrown up an abundance of them, each good enough to be in the national side. ‘The more the merrier’ is a nice phrase at most times. However, in selecting the squad from such a plethora of options, India seem to falter.

The India versus South Africa five-match T20I series is a good start towards India’s mission of World Cup 2022. Without Virat Kohli, Rohit Sharma and Jasprit Bumrah, India’s three major players, the loose ends will be visible. India’s core players need to play as many T20s as possible, as more than just individual talent, they need to understand the capabilities and deliverables of the other team members.

A very small aspect like running between the wickets or calling for a run requires one to feel comfortable with one’s partner. These are the small elements which make the difference in the end.

Rahul Dravid, in a recent interview, has quite clearly stated that he believes in continuity and is not inclined to make too many changes. One can, from this statement, deduce that he will opt for players whom he feels comfortable with rather than experiment with ones who have still to make a mark in international cricket.

This approach is precisely what one is concerned about. The recent success of the Gujarat Titans in the IPL has shown one the importance of batters who can at will clear the fence. The likes of Hardik Pandya, David Miller, Rahul Tewatia and even Rashid Khan made the impossible possible through their mighty hits.

These feats have clearly established that T20 is a game for the high and mighty big hitters. One does require the technically-skilled batsmen as well to steady the ship. However, their role is limited when the death overs come into play.

India is blessed with very good top-half batters in Rohit Sharma, KL Rahul, Virat Kohli, Shikhar Dhawan, Shubman Gill, Suryakumar Yadav, Shreyas Iyer and many others in that mould. However, for a T20 side, more than three of them in a side would be a luxury. India in the past have fallen prey to playing that one extra batter for comfort. This works against a relatively weaker side or when chasing a small total, but becomes a problem in other conditions when quick runs at a brisk pace are required.

Indian selectors need to identify the big hitters. India is fortunately blessed with three good all-rounders in Rishabh Pant, Hardik Pandya and Ravindra Jadeja. However, they require another solid finisher in the bottom half of the batting order.

The problem that India face is that none of their front-line pace bowlers, as well as Yuzvendra Chahal their leg-spinner, can fill in the big-hitter slot. Shardul Thakur was one whom one thought of as a pace-bowling all-rounder, but he has not been able to justify his position as yet.

With just four months to go for the T20 World Cup 2022, India needs to unearth and establish a few mighty strikers into the side. Be it Deepak Hooda, Tewatia or any other, they will need to be given opportunities to prove themselves.

The last T20 World Cup included Mahendra Singh Dhoni, Dinesh Karthik, an unfit Hardik Pandya and Kedar Jadhav. They were the trusted finishers. India seemed to have faltered in selecting them, similar to the fate that team Chennai and Mumbai faced in the IPL 2022.

The T20 format has shown that cricket has changed by leaps and bounds. Getting runs in the middle overs is not such a difficult task; it is the initial and the last overs that count finally. Similarly, with the bowling unit, it is the variations and reading of the batsman’s mind that is important, rather than just speed, swing and turn.

The onus is on the Indian selectors to think out of the box. This is the time for India to experiment, especially in the T20s. This is not a format that needs one to think conventionally. It needs players who are bold, aggressive and sure of their skills and ability.

Playing the mind game is important and the only way to beat that is to come forth with something entirely different and unpredictable.

The India versus Pakistan match should be a scorcher. India need to fire on all cylinders from the very outset or else, as in the last edition of the Cup, they will be ‘also rans’. India, unfortunately, then proved to be a team that missed out on thinking young. 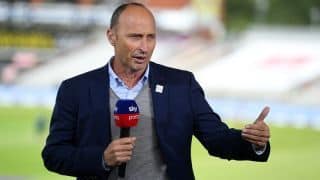