This Day That Year: Yuvraj Singh hits Stuart Broad for six sixes in an over

This Day That Year: Yuvraj Singh hits Stuart Broad for six sixes in an over

It was on September 19, 2007, 12 years ago when Yuvraj Singh hit the England pacer Stuart Broad for six sixes in an over

It was on September 19, 2007, 12 years ago when Yuvraj Singh hit the England pacer Stuart Broad for six sixes in an over in a group game of the ICC World Twenty20 2007.

It was the 21st match of the mega event, a Group E match between India and England at Kingsmead, Durban. India won the toss and chose to bat first on a good batting track. The Indian openers then, Virender Sehwag and Gautam Gambhir gave India a terrific start, sharing a 136-run opening stand before the recently retired Chris Tremlett castled Sehwag for a score of 68.

Following is how the over unfolded to create history in the world of cricket! Before the 19th over of the innings, Andrew Flintoff had come over to have a talk with Yuvraj Singh who had just come in to bat. MS Dhoni was the pacifier but by then the damage was done. Flintoff was facing Stuart Broad.

18.2 overs: SIX! Broad erred in his line and Yuvraj flicked this one over the fine leg region.

18.3 overs: SIX! Broad this time for a fuller one wide outside off, Yuvraj was waiting for it and carved it over cover.

18.4 overs: SIX! Broad changed the angle, went round the wicket, but dished out a full toss outside off, which was sliced over point for a maximum.

18.5 overs: SIX! Broad now was not in the best of his rhythm and bowled a length ball on the stumps, Yuvraj cleared his front leg and swung it over the leg side boundary.

18.6 overs: SIX! With so much at stake, Yuvraj delivered the goods as he got under another fullish length ball on the stumps and heaved it over mid-wicket to complete the six sixes in the over and also raced away to his fifty in just 12 balls, a record that is yet to be broken. 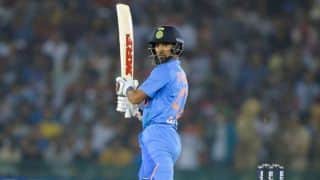 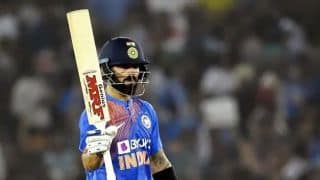