Thisara Perera scored a belligerent 49 off 20 deliveries at The Oval in London.

Thisara Perera‘s quick-fire 49 took Sri Lanka to 183 for seven in their Only Twenty20 International against England at The Oval, London on Tuesday. Dropped on 20 by Michael Carberry as England captain Eoin Morgan also converged on a skyer, No 7 batsman Perera faced just 20 deliveries with seven fours and two sixes.

He was run out off the last ball of the innings by Nottinghamshire left-arm seamer Harry Gurney, who marked his England T20I debut by leading the attack with two for 26.

Sri Lanka are the reigning World T20 champions but during their run to the title in Bangladesh they suffered a six-wicket defeat by England in March.

And, after losing the toss in overcast conditions, they saw both openers depart with the score on 24. Left-handers Kithuruwan Vithanage (38) and Lahiru Thirimanne (40) repaired the damage with a third-wicket stand of 54. Vithanage was making his T20I debut for Sri Lanka.

Gurney needed just four balls of his debut to take a wicket, bowling Tillakaratne Dilshan (14) with a fine delivery that clipped the top of off-stump. Dilshan’s fellow opener Kusal Perera (10) exited when he clipped Chris Jordan straight to Ravi Bopara at short fine-leg.

But Vithanage got Sri Lanka going again with three fours, all behind square on the offside, in as many balls off medium-pacer Bopara. Thirimanne had made just 14 when he was missed at point by Jordan, although it was a sharp chance off a Chris Woakes full-toss.

He eventually fell when he struck a full toss from Gurney to mid-wicket. Thisara Perera’s reprieve proved particularly costly for seamer Jordan, who saw the big-hitting left-hander smash his final four deliveries for 22 runs. 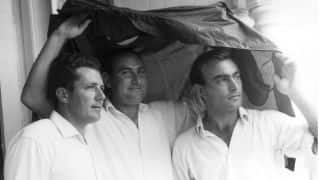