Harmison said that batsmen have to be assured in the movements on the pitch, front or back to counter the moving deliveries of Anderson and Broad at Trent Bridge

Former England right-arm fast bowler Steve Harmison has some sharp insights to offer on the reasons why James Anderson and Stuart Broad have leveraged so much success over the years. In an interview given to ESPNCricinfo, he also had a word of advice for the Indian batsmen on how to play the moving ball in England

Harmison played an instrumental role in many English victories in the last decade, most famously in the England victory campaign in the historic Ashes series of 2005.

“When you put records up, and you see James Anderson and Broad. Doesn’t matter where they are playing in the world, they’ll always come up with records. The longevity of the bowlers and their class stands out. But at Trent Bridge, they do very well because the ball swings more than any other ground in England here,” the former fast bowler said on the deadly combination of Broad & Anderson.

On the approach employed by Broad, Harmison had some interesting observations. “When you come up against Stuart Broad who is attacking and does pitch it up but he can pitch it short at the six-metre length. As an opening batsman, you are not sure whether to play him or leave him. And then the bouncer comes in and as a sub-continental player, you’re not used to play the short ball very well,” Harmison contended.

“The interesting thing with Stuart Broad is that when you look at the speed gun and it is around 85 mph, that means his tail is up and he is a very dangerous customer then,” he added.

“Jimmy Anderson at the other end is attacking your front pad and your outside edge consistently and that is why they complement each other well all over the world. He is consistent and mechanical to a great extent and his returns depend more on the marginal errors of batsmen,” Harmison said on Anderson.

Finally, the lanky bowler from Durham had pretty straightforward advice for the Indian batsmen, openers in particular. “The one thing about the Trent Bridge wicket is it will bounce more as it has a fair tinge of grass and as an opener, you’ll get a chance to leave the ball more. If I was the Indian team’s batting coach, I’d advise the Indian batsmen to find a way, i.e., work it out; you’re a good player and that’s why you’re playing for India. Forget the technique, that goes in the bin at this moment of time. You have to be confident in your movement off front and backfoot. If you fail to do that in England, you are bound to struggle,” Harmison signed off.

The Indian openers seem to have heard Harmison’s advice somehow as Shikhar Dhawan and KL Rahul added 60 runs for the first wicket in 18.1 overs before the former edged one from Woakes to get caught in the slips by Jos Buttler. This is the highest partnership Indian openers have managed outside Asia and the West Indies since Dhawan and Murali Vijay added 56 at Brisbane against Australia. 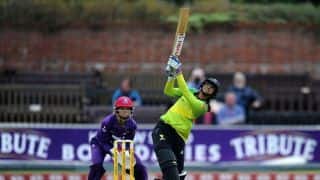 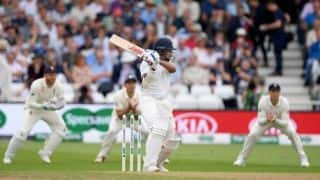