The vintage kit was worn by the Allan Border-led side against India during the 1985-86 Benson & Hedges World Series Cup.

In a throwback to the 80s, Australia will be donning the retro green and golden jersey for the three-match ODI against India starting Saturday. The vintage kit was worn by the Allan Border-led side against India during the 1985-86 Benson & Hedges World Series Cup, which they lifted by beating India 2-0 in best of three finals.

Australia have endured a slump on ODIs having lost their previous three bilateral series, and they would be keen on giving themselves a fresh start to the new year by wearing the inspirational kit.

Comeback man Peter Siddle is one of the many Australia players thrilled to be wearing the retro kit. Siddle was all but one year old when Australia sported the jersey and beat India, has been recalled into the one-day side after a gap of eight years. He last played an ODI in 2010 after entering a long limited-overs exile.

However, in the absence of Pat Cummins, Josh Hazlewood and Mitchell Starc, is expected to shoulder the fast bowling responsibilities along with Jhye Richardson, Billy Stanlake and Jason Behrendorff. With an impressive showing in the JLT Cup which saw Siddle showing promising form with.

As an excited Siddle gets ready to put on the retro kit, the 34-year-old does not rule out the possibility of applying another accessory one of his and many other’s hero, Dennis Lillee would occasionally sport.

“I might just pull out the headband,” he said. “I’ll have to ask Zamps (Adam Zampa) to borrow one of his and go with the DK (Lillee) headband. We’ll see what we pull out on Saturday.” Will be happy if I can achieve half of what Virender Sehwag did: Mayank Agarwal 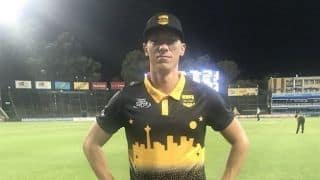