Tim Murtagh has been ruled out of Ireland‘s One-Day International at home to England on Friday, Cricket Ireland announced on Monday.

The 33-year-old seamer suffered a hamstring tear playing for Middlesex in their ongoing match against Durham at Lord’s in the First Division of English cricket’s County Championship and will undergo a scan on Tuesday to assess the extent of the injury, Cricket Ireland said in a statement.

Irish cricket chiefs have opted not to replace Murtagh, given they named an original squad of 14 from which their final XI will be selected for Friday’s match at Malahide, near Dublin.

London-born Murtagh has played 10 ODIs and seven Twenty20 Internationals (T20I) for Ireland since making his international debut against Australia at Belfast in 2012. He missed out on a spot in the Irish squad in the recently-concluded ICC Cricket World Cup 2015. Lamb caught Kourie bowled Rice: The dismissal that was a meal 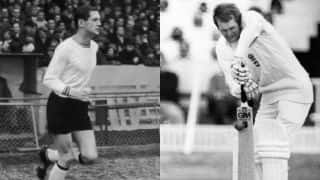