Tim Murtagh followed up his 4 for 32 with a quick 13-ball 19 not out to star in Ireland’s solitary win in this tour.

It ended up being much closer than one had expected it to be. After a roller coaster encounter, Ireland finally managed a consolation by two wickets in the third and final One-Day International (ODI) against Zimbabwe at Harare. At one point it seemed that the Irish batters were cruising towards the win but Zimbabwean bowled well and put up an inspiring fielding show as they almost got into a winning position. In the end, it was Tim Murtagh’s brilliant all-round show that sealed the game for Ireland. Murtagh followed up his 4 for 32 with a quick 13-ball 19 not out to star in Ireland’s solitary win in this tour.  Scorecard: Zimbabwe vs Ireland 2015, 3rd ODI at Harare

Ireland won the toss in the dead rubber contest and put Zimbabwe in. Ireland gambled with a 25-year-old Craig Young in place of the experienced John Mooney. Young, who grabbed the headlines last year with his fifer on debut against Scotland, bowled good pace and provided Ireland with an early breakthrough as he sent back opener Richmond Mutumbami in the very first over. From then on, it was Murtagh’s show. The veteran seamer bowled with lot of heart as he went on to register his best bowling figures in ODI cricket. His figures of 10-0-32-4, helped Ireland to restrict the home side to 187. Cricket Blog: Zimbabwe vs Ireland 2015, 3rd ODI at Harare

Brian Chari, who replaced Zimbabwe’s previous game’s centurion Craig Ervine, didn’t have a good time in the middle. Coming in at No.3, he crawled his way to 17 from 56-balls. Half-centuries from Sean Williams  (51) and Sikandar Raza ensured Zimbabwe reached to a score that was near 200. Apart from Murtagh’s four-for, Young, Kevin O’Brien, Andy McBrine and Paul Stirling chipped in with a wicket each.

Chasing 188, Ireland got off to a brilliant start and got 18 from their first over. Then on, Zimbabwe pulled it back and put a check on the scoring. Stirling held the fort at one end while the Zimbabwean bowlers kept chipping in with wickets at regular intervals. Ireland found themselves in a big spot of bother when Luke Jongwe dismissed Stirling in the 33rd over. Stirling was a set batsman and by then had scored his ninth ODI fifty. The M-trio of Zimbabwe — debutant Taurai Muzarabani, Wellington Masakadza and Tinotenda Mutombodzi claimed two wickets each and got Ireland reeling at 160 for 8 in the 43rd over. Murtagh struck two crucial boundaries towards the end of the innings as Ireland reached home in the 47th over.

Man of the Match: Tim Murtagh 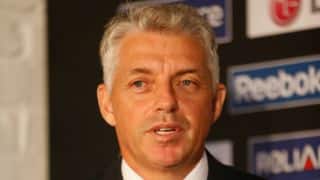