Australia's Test captain said that any batsman who is right amongst it in the Sheffield Shield will be seriously considered for a call-up against India.

Australia s Test captain Tim Paine has backed a return to international cricket for his Tasmania team-mate Matthew Wade, with batting positions not locked in ahead of the four-match series with India later this year. According to Paine, the leading run-getters of the ongoing 2018-19 Sheffield Shield are seriously within reach of a spot in Australia s Test squad for the home summer opener.

Wade, 30, has not played a Test for Australia since September 2017 with Paine a surprise recall later that year when England arrived for the Ashes. Wade was axed after averaging under 20 in 10 Tests since being called back in November 2016, and his return to Shield cricket began with scores of 1, 6, 9 and 17.

However, strong returns as the season continued, as well as a dominant start to the current one, have propelled him back into the reckoning as a specialist batsman. In 2018, across six Shield matches during the previous season and two this month, Wade averages 74. In two matches for Tasmania this month, the left-hander has crossed 50 on four occasions with a best of 72 not out.

Paine s return to lead Tasmania against New South Wales next week means that Wade will bat up the order and be freed of keeping wickets, and his skipper and close friend believes that if he keeps up the good form, there is chance Wade features in the Test series versus India in the first week of December.

“He’s one of the most in-form batters in the country at the moment so it might be an opportunity for him to bat a bit higher (against NSW) and get a big score,” he told cricket.com.au on Monday. “I didn’t see a lot of him last year, but I was home for the pre-season and watched him bat in the nets. It’s as well as I’ve seen him bat and obviously over his career he’s batted really well.

“He’s in fantastic form at the moment and if that continues for another month or so, who knows? We’ve been pretty clear that if you’re scoring enough runs, anyone’s a chance at the moment.”

Usman Khawaja faces the prospect of missing the start of Australia s home Test series with India with surgery for a meniscal tear on his left knee, and one of the leading candidates for a place in the squad is Victoria s Marcus Harris with a Shield-leading 276 runs in two innings, which owes to an unbeaten 250.

Paine said that any batsman who is right amongst it will be seriously considered for a Test call-up.

“What’s clear is the next two or three rounds of Shield cricket are super important for everyone both the guys who were on the Test tour (in the UAE) and guys who were here playing Shield cricket,” he said. “If you can make a case by scoring a lot of runs, a Baggy Green is seriously within reach.

“Marcus Harris scored a big double hundred; that’s the kind of thing that will certainly get the attention of Justin Langer and Trevor Hohns. Anyone who’s scoring double hundreds at the top of the order in Shield cricket is going to be right amongst it. He’s one of a few guys who’s certainly put his hand up in the opening few rounds.” 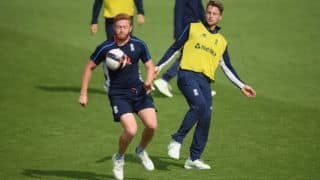