Tim Paine was hit on the face by a ball from Andrew Tye. His team, too, are 0-2 down.

Australia captain Tim Paine has said his side must deliver a “complete package” if they are to fight their way back into the ODI series against England. Saturday’s 38-run loss in the second ODI in Cardiff left Australia 2-0 down in a 5-match campaign against England, the top-ranked side in this format. It was also world champions Australia’s sixth defeat in 7 ODIs against England this year, a sequence that includes a 1-4 series loss Down Under in January. Overall, it also represented a 13th loss from their last 15 matches at this level that have produced a result.

Australia arrived for this series against 2019 World Cup hosts England without several first-choice players. Not only were former captain Steven Smith and his deputy David Warner, two of the world’s leading batsmen, ruled out with year-long bans imposed for their roles in the Cape Town ball-tampering fiasco in March, but Australia were also missing their injured Ashes-winning fast-bowling trio of Mitchell Starc, Pat Cummins and Josh Hazlewood.

Wednesday’s first ODI saw Australia’s batting fail in posting a meagre 214 before the bowlers, performing with huge credit, made England scrap their way to a 3-wicket win at The Oval.

It was a different story in Cardiff, however.

After Paine had won the toss, an Australia attack missing injured fast bowler Billy Stanlake, who had impressed at The Oval, saw England pile up 342 for 8 their highest ODI total against Australia thanks to Jason Roy’s 120 and a quickfire 91 not out from stand-in captain Jos Buttler.

This time a batsman gave Australia hope of an improbable win, with Shaun Marsh making 131 but receiving little support apart from Ashton Agar’s 46.

Australia have just a few days to regroup before Tuesday’s third ODI in Trent Bridge, where another defeat would give England an unassailable 3-0 series lead.

But Paine insisted the current Australia squad had the quality to turn the series around: “I think we can, I really do. I think our best cricket is good enough to beat these guys, we just haven’t put the complete package together. In the first game we didn’t bat well and [in Cardiff] we didn’t bowl as well as we would have liked.”

It was a sentiment echoed by Marsh: “We want to win and unfortunately we are just falling a little bit short at the moment. “We need to regroup over the next few days and work on the areas we need to work on and hopefully put in an all-round performance at Trent Bridge …

Marsh added he hoped Stanlake would be fit come Tuesday after a toe injury kept him on the sidelines in Cardiff: “Hopefully Bill will be right for the next game. I thought he was terrific in the first game and adds that real pace for us.”

Paine should be fit to lead the side in Trent Bridge despite having stitches inserted inside and outside his mouth after a legside delivery from Andrew Tye in Cardiff reared up on the second bounce to hit the gloveman flush in the face. 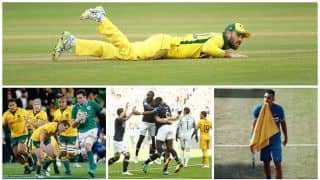 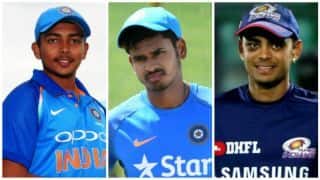