Fellow Kiwis Brendon McCullum and Daniel Vettori had already been appointed Middlesex captain and coach respectively for the competition.

London: New Zealand pace bowler Tim Southee has agreed to play for Middlesex during the English county’s Twenty20 Blast campaign. Southee, 28, will join Middlesex in early July and is scheduled to be available for 13 of their 14 group matches, plus the knockout stages if required. Fellow Kiwis Brendon McCullum and Daniel Vettori had already been appointed Middlesex captain and coach respectively for the competition, while another New Zealander, James Franklin, leads the team in the County Championship and One Day Cup. Middlesex managing director of cricket Angus Fraser said of Southee: “Tim is one of the leading fast bowlers in the world. He has plenty of experience in T20 cricket and looks to bowl in the periods where we feel we could be better.” READ: IPL 2017: Tim Southee halts team bus for washroom emergency

Southee, currently representing Mumbai Indians (MI) in the Indian Premier League (IPL), has played 57 Tests, 116 One-Day Internationals (ODI) and 39 T20 Internationals (T20I). “When the opportunity came up to play for Middlesex it wasn’t a tough decision to make and I’m looking forward to calling Lord’s home while I’m there,” he said. Southee has had injury problems of his own in the recent past but seems to be fit in the couple of matches he has played for MI in this season of the IPL. READ: Tim Southee: Story of New Zealand bowling attack s lynchpin compiled in 14 points

Southee, who is one off New Zealand’s strike bowlers, will look to put in a good show in the ICC Champions Trophy 2017, which begins from June 1. Incidentally, the last the only ICC trophy New Zealand have won was the Champions Trophy, which was way back in 2000 under Stephen Fleming’s captaincy. 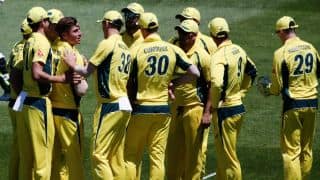