The trio will join Shivnarine Chanderpaul at MCL, which begins on January 28.

Tino Best, Fidel Edwards, Krishmar Santokie have announced their international announcements and will join Shivnarine Chanderpaul in playing the MAsters Champions League (MCL), which begins in a couple of days time. Upon announcement of their international retirements, The West Indies Cricket Board (WICB) has issued a No Objection Certificate (NOC), which will enable them to participate in the tournament. Chanderpaul and Edwards will play for Gemini Arabians and Leo Lions respectively. Best and Santokie on the other hand will represent Sagittarius Strikers. To participate in the MCL, one has to retirement from international cricket. It is scheduled to be played in the United Arab Emirates (UAE) between January 28 to February 13. READ: Krishmar Santokie: It was a great opportunity to be around Sachin Tendulkar and Anil Kumble in the Mumbai Indians dressing-room

Chief Executive of the WICB Michael Muirhead confirmed the players’ retirement and wished them the best in the MCL. “This is a tournament [for those] who have retired from international cricket,” he said. “We wish for a successful tournament and we hope the opportunity for all the players prove valuable,” according to barbadostoday.bb. READ: Tino Best remains an integral part of St Lucia Zouks: Darren Sammy

Chanderpaul, Best and Santokie are still eligible to play in regional and domestic tournaments in the West Indies, but Edwards, who signed a Kolpak deal in March 2015, can only do so as an overseas player. Chanderpaul too announced his retirement very recently after last playing for the West Indies in May 2015. Best has represented West Indies in 25 Tests, 26 One-Day internationals (ODI) and six T20 Internationals (T20I), last of which came in January 2014.

Santokie is the least experienced of all, having played in just 12 T20Is and has picked up 18 wickets at 6.8. 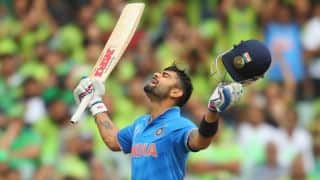 Virat Kohli is the best batsman across formats in international cricket: Proven