Defending champions and hosts Titans scored 155-6 after being sent in to bat on a sticky, uneven wicket at SuperSport Park.

Northern Titans won a record-extending fifth South African Twenty20 Challenge final with a six-run victory over Eastern Cape Warriors on Friday. Defending champions and hosts Titans scored 155-6 after being sent in to bat on a sticky, uneven wicket at SuperSport Park. After looking likely winners for much of their innings, Warriors could only reach 149-6 as they sought a second final success in the 20-over competition. Titan Aiden Markram (33) and Warriors Colin Ackermann (34) and Christiaan Jonker (33) top scored. Lungi Ngidi (2-27) and Tabraiz Shamsi (2-36) of Titans were the only bowlers to capture more than one wicket.

Apart from a fifth success, Titans became the first of the six South African franchises to successfully defend the T20 title since its introduction in the 2003-2004 season. Titans skipper Albie Morkel, who had to retire during the final with a hamstring injury, admitted he feared at one stage that his side would lose. “We were staring down the barrel of a gun,” the former international said. “The team displayed fantastic character to pull through.” Warriors were on course for victory at 125-4 after 15.5 overs, then lost two wickets within three balls without adding a run.

Qassim Adams was trapped leg before by Shamsi after making 17 and Ackermann presented Junior Dala with an easy catch near the boundary off the bowling of Ngidi. The visitors needed 12 runs off the final over to triumph, but Titan Malusi Siboto restricted them to five. Shamsi bowled well for his two wickets while Junior Dala was outtanding with the ball despite not chipping a single wicket. 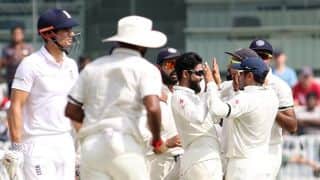