All-round performance from Dindigul Dragons helped them defeat Ruby Trichy Warriors by 23 runs in Match No. 17 of Tamil Nadu Premier League (TNPL) 2017. At the Indian Cement Company Ground, Tirunelveli, the Dragons first put up a competitive 154 for 7 and later showed commendable bowling performance to restrict the Warriors at 131 for 7, registering a 23-run comfortable victory. With the win, the Dragons now sit at No. 3 in the points table with two victories in five matches while Warriors are second from last with only one win from their four games. READ: Jonty Rhodes to mentor TNPL s Ruby Kanchi Warriors

Winning the toss, Dindigul Dragons elected to bat. Ruby Trichi Warriors got their first breakthrough in the second over as RajamaniJeshuraj removed Ganga Sridhar Raju for 1. Subramania Siva and Narayan Jagadeesan tried to build a partnership but soon, the former was removed by JagatheesanKousik for 19. It was not until captain AshwinVenkataraman came out to bat that the Dragons had a big knock coming. With a couple of fours and sixes, Venkataraman scored a 34-ball 41 which was a major contribution towards the scorecard. Another good innings came from R Vivek who added 32 facing only 17 balls, hitting 2 fours and 3 sixes.However, the Warriors bowlers dominated in the innings, Jesuraj, Kousik and Murthy Prabhu bagging a couple of wickets each.

Warriors batting failed miserably as they went on losing wickets in regular interval. 25 was the highest score by any batsman in the innings (Kousik and Prabhu). The top-order failed to add any crucial contribution with none of the top four batsmen managed to score in excess of 20.

Sunny Kumar Singh and Wilkins Victor were the pick of the bowlers for the Dragons with 2 wickets each. Rumman Raees: Playing Champions Trophy 2017 semis has taken my career to another level 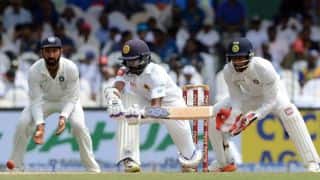