Chasing 151 for victory, Mukund and Shahrukh left their rivals gasping with a flurry of fours and sixes as they raced to 50 runs in just three overs

Chasing 151 for victory, Mukund and Shahrukh left their rivals gasping with a flurry of fours and sixes as they raced to 50 runs in just three overs. By the time Shahrukh departed, inside-edging left-arm pacer R Suthesh onto his stumps, for a 21-ball 40 (5 fours, 2 sixes), LKK were well on course. The opening partnership of 84 runs in 6.5 overs was also aided by some wayward bowling and misfields by the Kanchi Veerans, who conceded 16 wides and one no-ball.

The seasoned Mukund sliced and diced the rival bowling with finesse to maintain the tempo of the innings. The 29-year-old left-hander remained unbeaten on 70 (44 balls, 12 fours) as Lyca Kovai Kings romped home in the 16th over to win by eight wickets.

Mukund was also involved in a 50-run unbeaten alliance for the third wicket with Anirudh Sitaram (21 not out off 23 balls, 2 fours).

Earlier, diminutive wicketkeeper S Lokeshwar (51 off 41 balls) and captain Baba Aparajith (29 off 34 balls) steadied the Kanchi Veerans ship after their openers were back in the hut in the first two overs.

All-rounder Sanjay Yadav and Francis Rokins provided the much-needed impetus to the innings by landing lusty blows to help the side reach the 150-run mark.

The lanky Yadav, who hit two successive sixes off left-arm spinner Ajith Ram’s third over scored 31 runs off 23 balls while Rokins carted three sixes and a four in leg-spinner S Manigandan’s final over. The 31-year-old from Madurai creamed 25 runs off just 7 balls before holing out in the deep.

Left-arm pacer Thangarasu Natarajan, who claimed a wicket off his first ball by dismissing opener Vishal Vaidhya, was the most impressive of LKK bowlers. The 27-year-old Sunrisers Hyderabad bowler clocked speeds of 136kmph and returned economical figures of 4-0-21-2.

His opening bowling partner, K Vignesh, who had claimed VBKV opener U Mukilesh in his first over, didn’t give much away either (4-0-21-1).

The loss of openers did not deter Kanchi Veerans’ captain Aparajith, who broke the shackles with a series of fours before the 21-year-old Lokeshwar took charge by hitting sixes off Vignesh, Ajith Ram and off-spinner Malolan Rangarajan to up the scoring rate.

Their third-wicket partnership of 62 runs in 54 balls formed the basis of Veerans’ fightback. Lokeshwar then found an able ally in Yadav as the duo added 51 runs in 31 balls for the fourth wicket.

Although Manigandan went for 24 runs in his final over, which was also the 19th, he was the highest wicket-taker for LKK (3-40). The 23-year-old was a tad unlucky as Rokins was dropped by Anirudh Sitaram at long-on when the batsman was on 13.

Both teams stay put in Dindigul for their next matches. VB Kanchi Veerans run into Karaikudi Kaalai on Wednesday (July 24) while Lyca Kovai Kings will meet Tuti Patriots on Thursday (July 25). 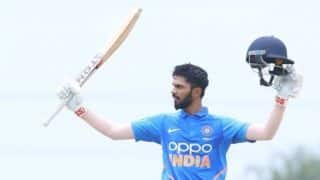 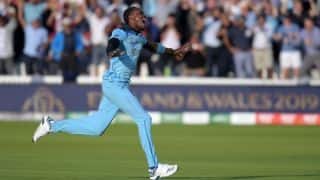