After SMP captain KB Arun Karthick won the toss and put Dindigul into bat, Coimbatore lads Nishanth and Jagadeesan made it count by raising 104 runs off 80 balls for the opening wicket. While Nishanth smashed three sixes and six fours in his 47-ball 57, Jagadeesan carried the bat to remain unbeaten on 87 (57 balls, 12 fours and 1 six) as DD posted 182-6 in 20 overs

The 24-year-old Jagadeesan created his own milestone in the 100thTNPL match by becoming the first batsman to score 1,000 runs in the league. His tally after the innings reads 1,008 runs from 25 matches, that includes 11 fifties. “Being part of the 100thmatch is a great feeling and more than that getting 1,000 runs in the 100th match is something special and something that I am really proud of,” he said.

Left-arm spinner M Silambarasan, who had claimed 4-13 in the first match against Chepauk Super Gillies, did an encore. The 21-year-old from Vellore broke the back of the SMP chase by dismissing openers Arun Karthick (24 off 17 balls) and A Sarathraj (26 off 21 balls) in his second over. It was a significant moment of the contest as both Karthick and Sarathraj had put SMP on course for the chase by raising 50 runs in the Powerplay. But Silambarasan’s double strike put SMP on the back foot and they never recovered from that. He went on to claim two more wickets to finish with an impressive analysis of 4-0-20-4.

Silambarasan credited his skipper for his rich haul. “I come well-prepared for my matches. Ashwin guides me and tells how to bowl to a particular batsman. He asks me to be bold no matter what I do,” he said.

The captain feels the young spinner has it in him to make it big. “He (Silambarasan) doesn’t shy away from a challenge. He is very happy to bowl at any part of the game. He is pretty much accurate with what he delivers, ninety per cent of the time he is able to get what is being said to him right. For someone who is so young, he has got pretty much most of the assets. I think he will get better over time,” Ashwin said.

Abhishek Tanwar (24 off 13 balls, three sixes) and Ramachandran Mithun (20 off 10 balls) tried in vain but by that time DD had a vice-like grip on the proceedings. DD captain Ashwin Ravichandran (3-16) claimed his first wickets of the season, including two of the last over. He dismissed Rahil Shah with his new action where his non-bowling arm remains static and he completes bowling the delivery on the wrong foot.

Karthick applauded his rivals for putting up a better show. “They batted very well and took the game deep. We could’ve bowled better. I think they bowled really well, they planned and bowled according to the wind factor,” he said.

Earlier, Nishanth held sway in the Powerplay while Jagadeesan took charge once the spinners came into the attack. The Dindigul wicketkeeper relished the slow bowlers as he went after off-spinner Mithun carting him for two successive sixes and followed it up with two back-to-back boundaries off left-arm spinner Rahil Shah.

The enterprise of Nishanth, who had hit a boundary in almost every over in the Powerplay, helped Jagadeesan settle in. Nishanth, who hit two successive sixes off off-spinner Mithun, got out going for another big hit off pacer J Kousik, Jagadeesan kept the runs flowing at the other end.

The 15thover bowled by medium-pacer Jabez Moses was the most productive for Dindigul as 24 runs came off with both Jagadeesan and Ashwin scoring a six and four each.

At 135-1 after 15 overs, Dindigul were primed for a big score but Rahil Shah pulled things back for SMP by dismissing Ashwin, NS Chaturved (1) and Sumant Jain (0) in successive over. The 34-year-old experienced spinner was the most successful SMP bowling returning figures of 4-0-21-3.

Jagadeesan provided a final flourish in the last over bowled by pacer Kiran Akash with a flurry of boundaries as Dindigul raked up 32 runs in the final two overs.

Both teams stay put in Tirunelveli for their next matches. Dindigul Dragons meet Tuti Patriots on Saturday (July 27) while Siechem Madurai Panthers take on VB Kanchi Veerans on Sunday (July 28). 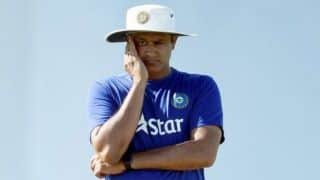