Openers Ganga Sridhar Raju (54 off 38 balls, 6 fours, 2 sixes) and KH Gopinath (55 off 40 balls, 4 fours, 2 sixes) played lead roles to help CSG post 175-8 in 20 overs, their highest of the season surpassing the 148 they recorded against Ruby Trichy Warriors. Fast bowler G Periyaswamy (3-0-9-2) ensured the 2017 champions dominance by dismissing both the openers V Aditya (2) and Anirudha Srikkanth (12) in his first two overs.

Thereafter wickets continued to fall at regular intervals as iDKK hurtled to their second defeat on the trot. U Sasidev heightened iDKK’s woes with two brilliant run outs that ended wicketkeeper R Kavin (4) and all-rounder Maan K Bafna’s (2) stay at the crease.

By the half-way stage iDKK were looking down the barrel at 58-5, needing another 117 runs in the remaining 10 overs. iDKK’s top scorer was M Shajahan (27) and their best partnership was worth 28 runs between Yo Mahesh (22) and S Swaminathan (17 not out) for the eighth wicket. They eventually closed out the innings at 121-8 in 20 overs.

CSG’s victory propelled them to the top of the eight-team standings as they have four points from three matches and their net run rate (+1.417) is better than Dindigul Dragons (+1.000), who have four points but they have played just two matches.

Captain Kaushik Gandhi’s decision to drop down the order following his poor scores of 0 and 1 in his previous two matches proved fruitful for Chepauk Super Gillies. The left and right combination of Ganga Raju and Gopinath justified their captain’s call to bat first by raising 108 runs in 11.2 overs. It was CSG’s second century partnership for the first wicket in the league and first century stand of the season.

The first three overs fetched only 14 runs for CSG but Ganga Raju broke the shackles with a six off left-arm spinner S Mohan Prasath and Gopinath followed suit in the next over carting Sunil Sam for a six over fine leg.

Raju then took charge pulling and driving with elan for a hat-trick of fours off medium-pacer Yo Mahesh, who struggled with a troubled knee and did not take the field after bowling two overs.

It was Gopinath’s turn in the eighth over when he smacked a six and two fours off three balls off Mohan Prasath. It turned out to be CSG’s most productive over of innings as 16 runs came off it.

The left-handed Ganga Raju brought up CSG’s hundred in style slog-sweeping off-spinner S Swaminathan for a big six over mid-wicket in the 11thover.

Left-arm spinner Bafna broke the alliance by foxing an advancing Ganga Raju with a widish delivery and wicketkeeper R Kavin pulled off a smart stumping.

The success in the 12th over spurred iDKK bowlers as they conceded just 15 runs in the next three overs before medium-pacer R Rajkumar claimed Gopinath. The 31-year-old batsman’s attempt at a big hit ended up high behind the bowlers head and V Aditya running in from mid-on made no mistake in pouching it.

Gopinath lived a charmed life as he was dropped on 0 by M Shajahan at mid-off off Yo Mahesh and then by substitute Kishan Kumar at the mid-wicket fence when he was on 23 off Mohan Prasath but he hung on to make iDKK pay for their lapses.

Although captain Kaushik Gandhi (32 off 21 balls, 4 fours, 1 six) and S Harish Kumar (10 off 8 balls) put on 31 runs off 17 balls for the third wicket, the iDKK bowlers restricted their rivals by claiming six wickets in the last three overs conceding just 16 runs.

Fast bowler Sunil Sam (2-25) was the most effective bowler for iDKK claiming Gandhi and Harish in his last over.

Both teams stay put in Tirunelveli for the next matches. While CSG meet Lyca Kovai Warriors on Sunday (July 28), iDKK will face Dindigul Dragons on Monday (July 29). 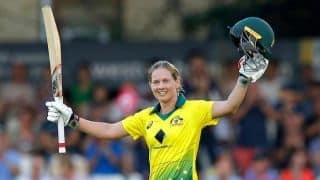