Set a target of 116 runs for victory, Chepauk saw their hopes suffer a serious dent when they lost three wickets in the first 12 balls.

On a day when bowlers held the roost, Dindigul Dragons made a strong defense of a modest total at the NPR College ground to down Chepauk Super Gillies in the opening match of the fourth Tamil Nadu Premier League (TNPL) here, on Friday.

The experienced fast bowler J Kaushik (2-21) and young left-arm spinner M Silambarasan (4-13) combined well to script a 10-run victory for last year’s finalists. Captain Ravichandran Ashwin had excelled with the bat earlier with a 19-ball 37 to spur Dindigul ahead after Chepauk won the toss and put the rivals in to bat.

Set a target of 116 runs for victory, Chepauk saw their hopes suffer a serious dent when they lost three wickets in the first 12 balls.

Captain Kaushik Gandhi fell off the first ball of the innings edging Kaushik to wicketkeeper Narayanan Jagadeesan, who took a fine tumbling catch on the leg side. Four balls later, CH Gopinath, trying to pull a short ball, holed out to mid-on and in the next over opener Ganga Sridhar Raju was unlucky to see the ball roll over to the stumps after he mistimed a pull off pacer M Mohammed.

The Chepauk innings failed to get over the early shocks and could only muster 105-9 in 20 overs.

Wicketkeeper A Arif (16 off 14 balls), Murugan Ashwin (16 off 23 balls) and S Harish Kumar (15) tried to up the scoring rate but Dindigul maintained a tight leash on the proceedings to launch their Season Four campaign on a winning note.

The 21-year-old Silambarasan from Vellore emerged as the top bowler for Dindigul claiming four wickets, two of which came in his third over. He returned impressive figures of 3-0-13-4.

J Kaushik believed that they could win at the break because they had an inspirational captain to guide them.

“With R Ashwin on our side, we definitely believed we could win. He said that the Powerplay was crucial and instructed us to bowl well at that time. Fortunately, we did that,” the 34-year-old bowler said.

Earlier, Chepauk spinners R Alexandar (3-11) and Murugan Ashwin (2-15) put the brakes on Dindigul innings as they tumbled from a healthy 69-2 in the ninth over to 115 for nine in 20 overs. Once Murugan Ashwin caught his namesake Ravichandran Ashwin off his own bowling, the innings lost its momentum.

Ashwin, who came in after the fall of opener Hari Nishanth (1) in the second over, went after the rival attack from the word go, carting a six off medium-pacer Rahul Dev. He also hit five fours, two in succession off left-arm spinner M Siddharth, as Dindigul’s ploy of maximising the scoring rate paid off. In the Powerplay, they galloped to 42-2 with Ashwin leading the way. However, he fell to M Ashwin’s leg-break offering a return catch to the bowler who held it on the second attempt.

Left-arm spinner Alexandar, who began with a wicket-maiden by dismissing opener Narayan Jagadeesan, rarely gave anything away. Jagadeesan, who was shaping up well (17 off 21 balls, including three fours), was bowled by an arm ball. Alexandar conceded just nine runs in his first spell of three overs before striking a double blow in his final over by claiming NS Chaturved (21) and debutant Sumant Jain (10).

The 24-year-old spinner was delighted that he executed his plans well. “My goal during the Powerplay was to take wickets. The instructions from the captain were to aim for the wickets. So, I concentrated only on that,” he said.

Of the three players who made their debut in the match, G Periyaswamy was the most impressive. The 25-year-old ‘slinger’ from Salem hustled most batsmen with his pace and finished with decent figures of 4-0-21-1, claiming his only wicket off the third ball of the match.

Both teams head to India Cements-Sankar Nagar ground, Tirunelveli for their next round of matches. While Dindigul will take on Siechen Madurai Panthers on Monday (July 22), Chepauk will meet Ruby Trichy Warriors the next day (Tuesday, July 23). 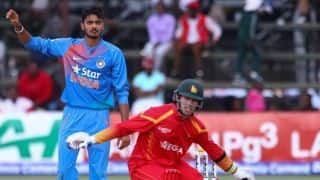 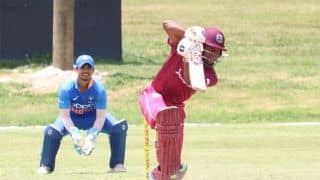