In a match interrupted by light rains twice, 37 minutes were lost but there was no reduction in the overs.

Left-arm spinner Ajith Ram, who bowled a sensational first over, logged figures of 4-1-12-2 while left-arm pacer Natarajan (4-1-15-2) was equally effective as LKK defended a modest total of 134 with aplomb. Together the left-armers knocked off five wickets in the Powerplay itself resulting in DD being bowled out for 99 in 18.5 overs for a 35-run victory.

The win that fetched two points for LKK does not guarantee them a Playoff spot. Their fate depends on how VB Kanchi Veerans fare in their last match against Ruby Trichy Warriors. If VBKV win LKK will be knocked out despite having the same number of points eight — as Baba Aparajith’s team will automatically have a better net run rate, irrespective of the margin of victory, than Abhinav Mukund’s men (0.255). VBKV’s current NRR is 0.575.

LKK can only qualify if VBKV lose to RTW.

S Sujay, playing his first match of the season, was the top scorer for DD with 34 runs off 46 balls. It was a hard grind for the 24-year-old from Coimbatore, whose only boundary came in 38 balls. He was also involved in the highest partnership of the innings worth 41 runs off 31 balls with No.8 M Mohammed (19 off 20 balls).

It was the first defeat in seven matches for DD, who were without their inspirational captain Ravichandran Ashwin for the first time this season.

In a match interrupted by light rains twice, 37 minutes were lost but there was no reduction in the overs.

Defending a modest total of 134 runs, LKK made a stunning start with Ajith Ram dismissing DD’s prolific run-getters C Hari Nishaanth and Narayan Jagadeesan for ducks in the first over, that was also a maiden. Nishaanth was bowled while Jagadeesan inside edged a delivery onto his stumps.

LKK’s star bowler Natarajan then hurt DD more with a double strike in his first over, that was also a maiden. He first ran out Sumant Jain (10) at the striker’s end and then found Rohit Ramalingam chopping an angled-delivery onto his stumps.

After six overs, DD’s scorecard read a sorry 20-4, which was not only their lowest Powerplay score of the season but also the lowest in TNPL. Their previous lowest was 21-3 against the same opponents in 2016.

Natarajan’s maiden over meant there were three such overs in the match, which was another first in the tournament’s short history.

Such was the impact of the left-armers that LKK captain Mukund used only three bowlers for the first 11 overs. Leg-spinner M Manigandan too had it good claiming three lower order wickets for 21 runs.

Earlier, LKK struggled to capitalise on the opening wicket stand of 50 runs in 40 balls featuring Shahrukh Khan (30 off 27 balls, 4 fours, 1 six) and captain Abhinav Mukund (21 off 20 balls, 1 four, 1 six). Once they got out, wicketkeeper Pradosh Ranjan Paul (43 off 35 balls, 2 fours, 2 sixes) was the only batsman to offer some resistance.

Runs were so hard to come by in the end that they lost five wickets for just 15 runs in the last three overs. Debutant fast bowler Baaskaran Praanesh (3-29) and pacer Rohit Ramalingam (2-14) did most of the damage sharing five wickets between themselves, while the fifth wicket of Ajith Ram came via run out on the last ball of the innings.

The 23-year-old Praanesh impressed with his pace and bounce, hitting Paul’s helmet in his second over. He also claimed Mukund in the same over, which was a wicket maiden. It was a smart comeback by the Thiruvallur bowler, who had conceded 17 runs in his first over. He finished with 3-29, with figures of his last three overs reading an impressive 3-0-12-3.

Leg-spinner Abhinav Mohan (1-22) and medium-pacer Adithya Arun (1-16) were instrumental in restricting their rivals in the middle overs. Arun dealt the first blow by claiming Shahrukh and then Abhinav dismissed Ashwin Venkataraman (18 off 20 balls). Ashwin’s exit also ended his third-wicket partnership of 32 runs off 34 balls with Paul. 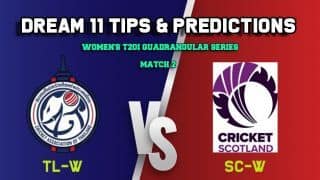 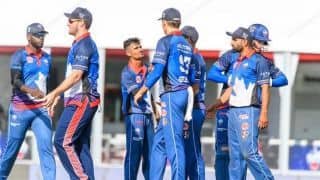