Nathan Coulter-Nile has taken up yoga classes led by Cameron Bancroft to avoid another stress fracture in his lower back.

Nathan Coulter-Nile, the injury-prone Australia fast bowler has taken up yoga classes led by Cameron Bancroft to avoid another stress fracture in his lower back. Bancroft banned for nine months by Cricket Australia for his involvement in the ball tampering controversy earlier this year in March, undertook a yoga teaching course and has become to Coulter-Nile and others.

“We always do a little bit but I’ve just tried to really rush into it head on this year and do it two to three times a week when I can,” Coulter-Nile said. “Obviously, when I’m away it’s a little bit harder. Just trying to do everything I can. I’ve got a really good management programme in place. I don’t bowl too much. I don’t do too much. Just really when I can, just play, rest up and play, give my back as much time as it can to recover.”

“He (Bancroft) was good. I think he’s just done a course in Melbourne for the last two or three months,” Coulter-Nile said. “He was really good, really brought us down to earth.”

Bancroft was one of the three punished by CA, with Steve Smith and David Warner being the other two subjected to 12-month-long bans. While there have been clamours to reduce or lift their bans with the Australian side struggling, Coulter-Nile wasn t too vocal about the topic.

“I’ve got an opinion on everything. It doesn’t matter what my opinion is,” Coulter-Nile said. “They’re banned. They’re not here. Of course, we’d like them to play. I’d like everyone to play, but it is what it is.”

Coulter-Nile, who last played an international match for Australia in October last year, has been hampered by stress fractures but following a successful recovery, the 31-year-old has been named in the ODI squad for the series against Australia. Following a 0-3 drubbing in the recently concluded T20Is against Pakistan in the UAE, Coulter Nile believes the practice sessions are coming along well and was confident of Australia batsmen getting themselves out of the rut.

“Everyone always says it when you’re having a bit of a bad trot they say you’re hitting them well in the nets. I feel they haven’t been,” Coulter-Nile said. “I feel they’ve been struggling in the nets. But then they’ve got here and, I don’t know what it is, but in Australia they seem to fire.

“I can personally say I hate bowling to Lynny and Finchy; I hate it, it’s scary in the games. And they should take that confidence into these games. If Hoff [Josh Hazlewood] and Starcy [Mitchell Starc] are scared bowling to them, I’m sure the South Africans are as well.” 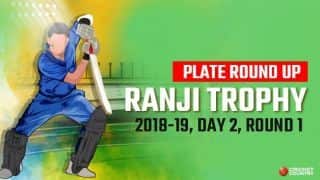