Toby Roland-Jones: Every kid dreams of this moment

Toby Roland-Jones: Every kid dreams of this moment

Toby Roland-Jones was understandably elated after a stunning start to his Test career saw him run through South Africa's top order at The Oval on Friday.

England paceman Toby Roland-Jones was understandably elated after a stunning start to his Test career saw him run through South Africa’s top order at The Oval on Friday. Roland-Jones removed both Proteas openers, star batsman Hashim Amla and dangerous number four Quinton de Kock on his way to a return of four for 39 in 11 overs. At stumps on the second day of the third Test, South Africa were 126 for eight in reply to England s first innings 353, which featured a hundred from Ben Stokes.

Although faced with a deficit of 227 runs, this represented something of a recovery by the Proteas after they had collapsed to 61 for seven in the face of an inspired spell from Roland-Jones, who made his name on the other side of London’s River Thames with Lord’s-based reigning county champions Middlesex.

The Proteas, all square at 1-1 in this four-match series after their thumping 340-run win at Trent Bridge, need 28 more runs to avoid the follow-on, and they will hope Vernon Philander is fit enough to help them after an overnight hospital stay due to a suspected viral infection.

Philander would certainly have relished the heavy cloud cover the 29-year-old Roland-Jones enjoyed in a haul that saw him have Amla, who made South Africa’s record Test score of 311 not out at The Oval five years ago, caught behind for a mere six runs on Friday.

I suppose this is the moment that every young kid dreams of, representing their country, and I am no different, said Roland-Jones. The way this afternoon unfolded was certainly something I hadn t pictured. You try to have a pretty simple plan in your head…but things (just) seemed to catch fire a little bit.

As for getting rid of Amla, Roland-Jones said: It was nice to see the back of him, knowing it was always going to be a key wicket.

Stokes ensured his early hard work and former captain Alastair Cook’s innings of 88 did not go to waste. The Durham all-rounder went to his fifth Test century in style with successive sixes off spinner Keshav Maharaj, although the first was caught right out in the deep by Faf du Plessis only for the South Africa captain to brush a boundary marker with his shoulder.

It s probably one of those (hundreds) I’ve worked for the hardest, said Stokes. I didn’t feel in the best of form on the first day, played and missed at quite a lot of balls, and Vernon had a couple over me. I just had to stick in there with Cooky. We knew we just had to work through the hard times, and put away any bad balls.

Stokes was still nine runs shy of a century when James Anderson, England’s last man, walked out to bat.

Jimmy said ‘What are you going to do?’ — and I think I just said ‘Wallop’, explained Stokes.

Thanks to Faf, he took a good catch, but just managed to fly over, he added.

Philander’s absence left South Africa with a huge gap to fill and a team spokeswoman said: He is going to spend the evening in hospital. He is on a drip at the moment. The doctors think it might be a viral infection, and we will only know tomorrow (Saturday) whether he can take any part in play. He will be reassessed in the morning, she added. 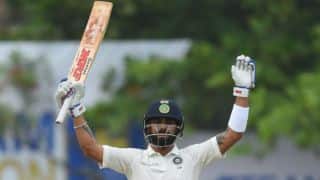