Toby Roland-Jones made a successful start to his Test career in the Test series between England and South Africa in July-August.

England seamer Toby Roland-Jones is in danger of missing out on the Ashes tour of Australia, after his county Middlesex announced Friday a stress fracture of the back will rule him out of the rest of the domestic season. The 29-year-old has enjoyed a successful start to his international career, taking 5 for 57 in his first Test innings against South Africa at The Oval in July. “Middlesex Cricket are extremely disappointed to announce that the result of the medical scan which Toby undertook yesterday (Thursday) has revealed that he has a stress fracture in his L5 vertebra (lower back), which will mean that he will take no further part in the domestic season for Middlesex,” said a statement.

Roland-Jones — who spearheaded Middlesex’s championship-winning campaign last season — has taken 17 wickets in 4 Tests at an average of 19.64. England will announce their Ashes squad on Wednesday, with the first Test starting in Brisbane on November 23. Currently, England are involved in the five-match ODI series versus West Indies at home. They lead the series 1-0 after two games. 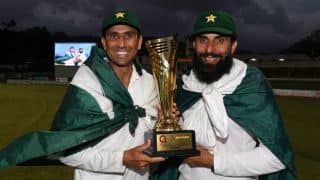