Blundell became only the fifth wicketkeeper-batsmen to achieve such a feat.

With regular wicketkeeper BJ Watling out of the series, New Zealand selectors banked on Tom Blundell to come good with the bat. On day three of the first Test, Blundell became the first New Zealand wicketkeeper-batsmen to score a century on debut.

He is overall the 105th player to achieve this feat and only the fifth wicketkeeper-batsmen after Umar Akmal, Matt Prior, Brendon Kuruppu and Romesh Kaluwitharana. Blundell, who played his school cricket just a throw away from Basin Reserve, surpassed Luke Ronchi s record. Ronchi had scored 88 on his debut Test against England at Leeds.

It must be noted that Ronchi and Brendon McCullum were the only two wicketkeepers to have scored a fifty or above on debut.

Blundell was also New Zealand s 11th player to score a century on debut. His century came in 178 balls, including 13 fours. Blundell remained unbeaten on 107*, as Kane Williamson declared New Zealand s innings on 520 for 9, taking a 386-run lead over West Indies. 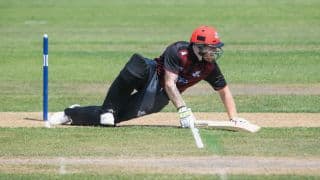 Ben Stokes fails with the bat on his debut for Canterbury