Latham and Raval have put up unbeaten 67-run stand comprising of 11 fours with New Zealand trailing by 247 runs on Day Two of 3rd Test.

Tom Latham and Jeet Raval s highest opening wicket stand in this series frustrated South African bowlers, as the two ended Day Two s play with New Zealand trailing by 247 in third and final Test. Latham and Raval have put up unbeaten 67-run stand comprising of 11 fours. By the looks of it, New Zealand have easily snatched the game in their favour overshadowing Quinton de Kock s defiant knock of 90. Latham not only had a great outing during the fielding with some splendid catches but also with the bat as he is 8 runs away from securing his first fifty in this series. Meanwhile, Jeet Raval continued to be consistent and remained unbeaten on 24. Full Cricket Scorecard: New Zealand vs South Africa, 3rd Test at Hamilton

In reply to South Africa s 314, New Zealand s opening pair started off on a shaky note as Vernon Philander started off his over with an lbw appeal that was declared out by the on-field umpire. However, Latham reviewed it and DRS saw the delivery moving off the pad, eventually reversing the on-field umpire s decision. Latham came under scrutiny once again, this time an appeal by Morne Morkel and on reviewing the delivery; it was revealed that it pitched outside leg with South Africa wasting a review. New Zealand slowly picked the pace and Raval was off the mark with first boundary for New Zealand towards gully and slips off Philander.

Latham continued the momentum the next over with a four off Morkel through the covers. By drinks break, New Zealand were 28 for no loss with both batsmen placed with similar scores of 14. Keshav Maharaj was introduced in the 15th over who did get the turn that was required. However, it bore no result. By the 20th over, Latham and Raval took New Zealand to 50 with a boundary off Rabada towards deep mid-wicket. The duo then added 15 runs in the final few overs of the Day Two s play that ended due to bad light.

Earlier, de Kock s fine knock lifted the South African innings to 300-run mark, just like it was witnessed at Wellington where his 91 runs in the first innings took South Africa to 8-wicket victory. De Kock faced 118 deliveries in his knock that consisted of 2 sixes and 11 fours. De Kock entered the crease following the wicket of Temba Bavuma early in the day when South Africa were 148 for 5. It was Wagner who bagged his first wicket in the form of a crucial one of de Kock after appealing for lbw that worked in New Zealand s favour with a straightforward delivery that was hitting his leg stump.

From there, it was the tail-enders Rabada and Morkel s quick fire 19 runs off the final few overs of the South African innings. Wagner bagged his third wicket clipping Rabada for 34, which is now the highest Test score for the pacer, thereby wrapping South Africa innings for 314. Watch: Latham s astounding catch to dismiss Du Plessis on Day Two of 3rd Test

Earlier in the day, Bavuma looked comfortable with captain Faf du Plessis, until he tried to pull the short ball of Matt Henry that caught the toe of the bat and flew to Raval in the first slip. Meanwhile, du Plessis was removed by Latham with a stunning catch at the short leg with Mitchell Santner bagging his only wicket.

He was again in the action, taking a catch low down at second slip when Philander on 11 edged a swinging Henry delivery, in turn handing him his 4-for. In his brief stay, Philander completed 1,000 Test runs and became the 6th South African to the double of 1,000 runs and 100 wickets after Jacques Kallis, Nicky Boje, Dale Steyn, Shaun Pollock and Trevor Goddard.

Maharaj went cheaply for 9 after lunch break when his attempt to fend off a Wagner bouncer was gloved through to BJ Watling behind the stumps.

On Day One, New Zealand ruled the two sessions grabbing wickets in succession of openers Dean Elgar and debutant Theunis de Bruyn. However, Hashim Amla s first fifty of the series and JP Duminy s knock of 20 covered up for the damage caused and took South Africa to 123 for 4. Post the tea break, four hours play was interrupted by rain, thereby abandoning the day s play. 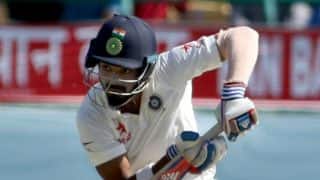 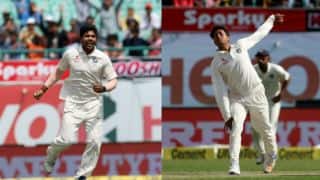