Tom Latham and Luke Ronchi got New Zealand back into the game after a shaky start.

Tom Latham and Luke Ronchi missed out on a well-deserved century for New Zealand against England on Day One of the second Test at Headingley. Latham was the first one to be dismissed for 84 after Joe Root pouched the ball safely at slips off the bowling of Stuart Broad. Ronchi then went soon as he was caught by James Anderson for 88 off just 70 deliveries. Live Updates:England vs New Zealand, 2nd Test at Headingley

Ronchi is making his Test debut for New Zealand, replacing all-rounder Corey Anderson. Latham on the other hand was already dropped thrice in this innings, but could not make it count as he fell 16 short if his ton. Ronchi is the designated wicket keeper in this match and BJ Watling, eho was the wicket keeper in the first Test is playing the match in the capacity of a batsman. Scorecard:England vs New Zealand, 2nd Test at Headingley

Earlier, England had won the toss and elected to field first. Anderson got to 400 wickets in Tests after he got a couple of wickets early on. Rains interrupted a chunk of the first session, but New Zealand have played good counter-attacking cricket since coming on. 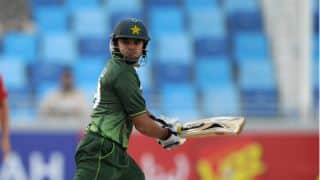