Moody said the team had a few options like asking New Zealander Martin Guptill or Billy Stanlake of Australia to fill in for Warner.

Sunrisers Hyderabad head coach Tom Moody is confident that his team would be able to successfully execute their plans and stop Mumbai Indians‘ impact player Hardik Pandya, when the two teams lock horns in an Indian Premier League (IPL 2019) encounter on Thursday.

“There are a number of players playing in the tournament like Hardik they are impact players, dangerous players. The bottom line is you need to remove them, you need to get them out because if they spend time in the middle, they are going to hurt you,” said Moody at the media conference.

Moody said that they have certain plans ready for Hardik. “We have our plans set for the likes of Hardik. Kieron Pollard is another one, who can cause havoc at the back-end of T20 games,” added Moody. (ALSO READ: Kieron Pollard finds unusual way of describing Mumbai Indians team-mate Hardik Pandya)

Pandya has been in terrific form in this IPL season, having smashed 27 sixes and 25 fours, most of them in the last few overs, while amassing 355 runs in 12 games. His 34-ball 91 against Kolkata Knight Riders in the previous game went in vain as MI lost by 34 runs.

Moody insisted that last year’s losing finalists SRH, who need a win to stay in the hunt for a play-off spot, will approach the game at the Wankhede Stadium as they had done from the beginning without putting pressure on themselves. (ALSO READ: IPL 2019 playoffs scenario: How five teams can qualify for two spots)

“For us, this game is no different from our first game of the tournament. It’s an important game like every game in this tournament is. We all know that this is a tough competition, so our approach is certainly no different.

“We are not putting ourselves under any additional pressure. That’s not gonna (going to) do us any good. We just need to make sure that we compete for 40 overs,” he remarked.

Admitting that the homeward departure of in-form Australian opening batsman David Warner will have an impact, Moody said it has allowed someone else to rise to the occasion as was the case last season when the diminutive left-handed batsman was absent after being banned by Cricket Australia for his role in the ball-tampering episode in South Africa.

“David has had a remarkable series. 692 runs in 12 games is something he should be very proud of. The bottom line from our point of view is how it affects the team and creates an opportunity. We were faced with the same situation last season. We did not have David Warner. We played the final (against eventual champions Chennai Super Kings).

“We saw Kane Williamson last season had a remarkable season himself. So, we are going to miss David. But I look at the positive sides. What it does is, gives us an opportunity as a side to play as well differently with different personnel,” said Moody. (ALSO READ: Sans David Warner, Sunrisers Hyderabad out to spoil Mumbai Indians party)

Moody said the team had a few options like asking New Zealander Martin Guptill or Billy Stanlake of Australia to fill in for Warner.

“We have got a few options. Of course, Guptill is the obvious one. Being a world class opener himself, he is a like-for-like replacement. But we are also looking at someone like a Billy Stanlake at a venue like this,” Moody elaborated. 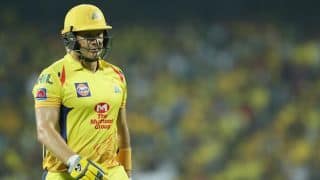