Westley, who scored 59 on debut is coming back of a good county show that includes two hundreds and two fifties in eight matches.

With preparation already underway for the upcoming Ashes in Australia, England have started to groom players at various positions. With almost every passing series the English and Wales Cricket Board (ECB) have invested in younger talents from Haseeb Hameed, Keaton Jennings, Toby Roland-Jones to Tom Westley. These players renowned for their county success found a place in the national side and have had reasonable performances so far. One such player is Westley, who debuted against South Africa. Former England skipper Michael Vaughan has come heavy on Essex batsman for his run of failures.

Speaking to BBC, Vaughan said, In two innings against West Indies he has played across the line twice. It is a real issue for him. Batting at number three you can’t have that fragility of a technique. He further explained, “(If you) bowl a (good) channel his head falls over to the off side and he finds it difficult to get a stride in. That front foot has to be flat on the ground when you are playing a drive or forward defensive. For his wicket he is on his tip toes with his front foot. He has no balance at all.

Westley, who scored 59 on debut is coming back of a good county championship show that includes two hundreds and two fifties in eight matches at 53.11. Looking ahead to The Ashes, Vaughan stated, “These players have got an opportunity to get on the trip to Australia and all three have made mental or technical mistakes.

“The selectors will be concerned. They will be supportive to the public and in the media but privately will have real concern, Vaughan concluded. 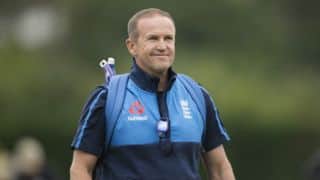