After slumping to their second defeat in the ongoing Champions League Twenty20, Chennai Super Kings opener Mike Hussey felt one of their top-order batsmen should have dug in and anchored the defending champions home against Trinidad and Tobago. 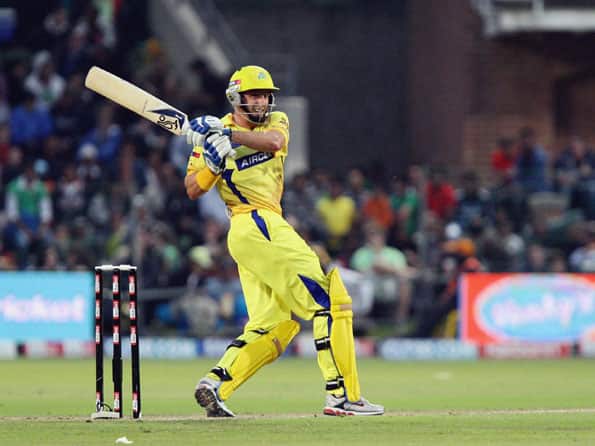 After slumping to their second defeat in the ongoing Champions League Twenty20, Chennai Super Kings opener Mike Hussey felt one of their top-order batsmen should have dug in and anchored the defending champions home against Trinidad and Tobago.

Chennai’s hope of making it to the semi-final of the Twenty20 tournament were dealt a severe blow last night when they lost to T&T by 12 runs in a low-scoring Group A match.

Chasing a small target of 124, Chennai were restricted to 111 for six at sluggish the M.A Chidambaram wicket to hand T&T its first win in the tournament.

“It wasn’t a difficult target. We had our plans ready. We wanted to get off to a good start, keep wickets intact and then attack in the last few overs. But unfortunately, we lost three quick wickets. Ideally, one of the top three or four should have played a majority of the innings,” Hussey said after the loss.

The result opened up Group A and a clear picture will emerge only on Tuesday as New South Wales, Cape Cobras, T&T and Chennai, who have the poorest run-rate, all are in the semifinal hunt at least mathematically even though the road is more than difficult for the title holders. Mumbai Indians, however, are sitting pretty at the top with five points.

Against T&T on Sunday, Chennai were also done in by another shoddy performance from its middle-order.

“Ours is a flexible order but we lost quick wickets. We needed someone to stabilise the innings, and that’s the reason we sent Wriddhiman Saha up the order. Both Saha and S Badrinath have done the job for us previously. But unfortunately, it didn’t work today,” Hussey said.

Besides, T&T off-spinner Sunil Narine also wreaked havoc with the ball and made life uneasy for Chennai batsmen with his variations.

Narine turned out to be the star for the West Indian outfit, scalping three wickets for just eight runs from his four overs.

“We couldn’t read which way he (Narine) was spinning the ball because we haven’t played him before. Sometimes, it’s tough to play someone we haven’t faced,” Hussey said.

“There was a bit of Ajantha Mendis sort of mystery with him, but the more we play him we will get used to him, as it happened with Mendis. I thought their spinners bowled wonderfully and the slowness of the track aided them,” he added.

Hussey also admitted that Chennai’s ploy of opening their bowling with two medium pacers instead of off-spinner R Ashwin backfired.

“There was a bit of variable bounce on the track, so we thought it’s better to use fast bowlers up front. A lot of balls kept low, and medium pacers could have better utilised it,” the Australian said.

Even though the re-laid Chepauk wicket is far from its best in the ongoing CLT20, Hussey backed it to play better in future.

“After the IPL, they dug it up and re-laid it, and most pitches will take time to be din. So we have to give some more time for the groundsmen to work on it. The crowd will obviously be quite disappointed, but come next IPL, I’m sure there will be plenty of runs on this wicket. But as a player, we should be able adapt to all kinds of pitches,” he stated.(PTI)

Sunil Joshi to take over as Hyderabad coach