Melbourne: Australian first-class cricketer Travis Dean scripted history by becoming the first player to score two unbeaten centuries on debut in Sheffield Shield‘s 123-year cricketing history. The 23-year-old remained not out on 109 to add to his first innings unbeaten knock of 154 as Victoria Bushrangers eased to a stunning nine-wicket win over Queensland at the MCG with nine wickets and one session of play to spare, News.com.au reported. Dean was picked ahead of limited-overs specialist and World Cup winner Aaron Finch for the opening round of the Sheffield Shield season. Callum Ferguson escapes Mitchell Starc bouncer narrowly

Earlier in an other game, South Australia (SA) batsman Callum Ferguson escaped a dangerous bouncer from opponent New South Wales(NSW) bowler Mitchell Starc narrowly on Friday. In the Sheffield Shield match between SA and NSW, SA were batting at 65/4 on day three as Ferguson was in the crease. The bouncer crashed into the newly added plastic and foam attachment. The attachment was added following the sad incident with Australia cricketer Phil Hughes. As the Starc delivery hit the helmet, the attachment got knocked off leaving both the bowler and the batsman in shock. All the players on the field gathered around Ferguson to look into the matter as the batsman stood stunned.

David Warner from NSW, who was present during the Hughes incident, looked the most concerned and was the first one to rush to Ferguson. The latter stood still and after taking some time, he was back and fit to play. Ferguson remained not out at 13 till the break on third day. Earlier, NSW declared their second innings at 291-1. Steve Smith scored 152 not out for them as Ed Cowan added an unbeaten 107. 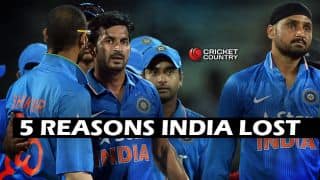