James Tredwell atoned for dropping two catches with three wickets as England restricted South Africa to 220 for eight in the fourth one-day international at Lord's on Sunday. 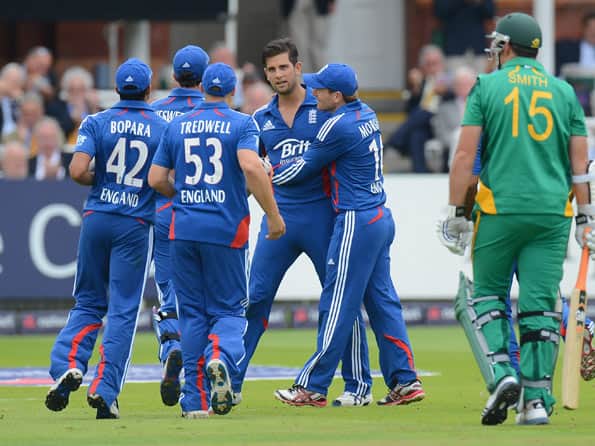 James Tredwell atoned for dropping two catches with three wickets as England restricted South Africa to 220 for eight in the fourth one-day international at Lord’s on Sunday.

The off-spinner took three for 35, all stumped by wicket-keeper Craig Kieswetter — in eight overs.

Tredwell had kept his place after figures of two for 49 during England’s four-wicket win across London at The Oval on Friday which levelled the five-match series at 1-1.

The Kent bowler only got his chance when England rested number one spinner Graeme Swann for the rest of this series because of a longstanding elbow injury.

And it seemed England might miss Swann as much for his slip catching as his bowling on Sunday when Tredwell dropped openers Hashim Amla, on four, and Graeme Smith, on 26, both off fast bowler Steven Finn.

But unlike previous England dropped catches this season — which helped Amla become the first South African to a Test triple century, at The Oval last month, and 150 in an 80-run win in the second one-dayer in Southampton on Tuesday — neither proved excessively costly.

Instead it was South Africa-born Dernbach who had Smith, on 29, top-edging a pull to Kieswetter to leave the Proteas 68 for one after England captain Alastair Cook won the toss and fielded in overcast conditions that promised assistance to his seamers.

And missing Amla, ‘only’ cost England 41 runs Sunday when he was bowled between bat and pad by medium-pacer Ravi Bopara for an innings top score of 45.

Amla’s exit was the start of a South Africa collapse from 100 for one to 115 for four.

JP Duminy was stumped off a well-flighted Tredwell delivery, before Bopara (two for 34) bowled Faf du Plessis off the inside edge.

South Africa went 13 overs without a boundary as captain AB de Villiers and Dean Elgar compiled a stand of 51 in 74 balls.

But de Villiers (29) and Wayne Parnell (five) were both stumped by former South Africa junior international Kieswetter, who finished with five dismissals in the innings, as Tredwell took two wickets for no runs in five balls.

Robin Peterson struck Tredwell for a switch-hit four and a six off successive deliveries, the left-hander’s 31 not out coming off 20 balls.(AFP)

Virat Kohli feels century in Test cricket is 'most satisfying'