New Zealand will now look to get off to a good start when they come out to bat.

New Zealand wrapped up things quickly as they managed to dismiss England for 389 on Day Two of the First Test at Lord’s. England just managed to add  35 runs to their overnight score. Moeen Ali got to his half-century and was immediately dismissed and the tail could not last much either as Stuart Broad and  James Anderson were dismissed in quick succession. Trent Boult was relentless and it paid of as he picked up two more wickets, finishing with four overall. Live Cricket Score England vs New Zealand 2015, 1st Test at Lord’s, Day 2

England resumed Day Two from their overnight score 354 for seven. England were in a spot of bother on Day One when they were reduced to 30 for four early in the day. But Joe Root and Ben Stokes stitched a 161-run stand for the fourth wicket, which brought them back into the game. Stokes’ excellent counter-attacking innings was brought to an abrupt end when he was cleaned up off-spinner Mark Craig for a 94-ball 92. Live Scorecard: England vs New Zealand, 1st Test, Day 2

England however did not let the momentum slip as Buttler and Moeen Ali were involved in yet another excellent partnership  for the sixth wicket after Root’s dismissal Root was dismissed two short of a well-deserved century . Their 103-run stand was crucial as it ensured that the English dominance continued. But Butler was unfortunately dismissed off the final delivery of Day One, giving New Zealand the momentum going into the dressing room. Eng vs NZ 2015, 1st Test at Lord’s, Free Live Cricket Streaming Online on Star Sports, Day 2

New Zealand managed to continue their momentum into Day Two as they were able to get the remaining wickets soon. Brendon McCullum will be reasonably happy with his bowler’s overall performance. He will now hope that his batsmen deliver and New Zealand set a platform from where they can overturn this deficit.

New Zealand had won the toss and decided to bat first on Day One. Matt Henry made his debut for the Kiwis and was impressive on Day One as he was the pick of the bowlers with three wickets to his name. England will be happy after they scored these many runs after being on the back foot in the initial stages of the match. 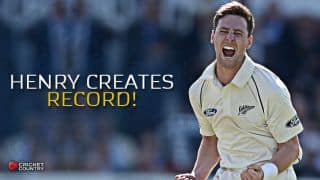