New Zealand seamer Trent Boult on Wednesday said that it will be difficult to find a charismatic leader like Brendon McCullum.

New Delhi: New Zealand seamer Trent Boult on Wednesday said that it will be difficult to find a charismatic leader like Brendon McCullum while admitting that current skipper Kane Williamson is going “through pretty tough time” as a captain. Asked to compare the two, Boult gave an elaborate explanation. “Kane is a classy player and has been ranked as a top batsman for a reason. In a way, he has had pretty tough time walking into the role of captaincy. It has been a learning experience for the whole team to be honest. The way Brendon led the team, I don’t think anyone could do it as well as he did it. He set his own tone, we all know what kind of explosive batsman, he is. But we are stacked up with lot of quality players in the side and we need all of them to stand up and put in good performance,” Boult said. Full Cricket Scorecard, India vs New Zealand, 2nd ODI

While he did not want to point fingers at any particular batsmen, he said that a collective effort is needed from them after an indifferent tour so far. “As a unit, we are looking to get more runs. If we get more runs on the board, we can put more scoreboard pressure on a good Indian side. I am not going to single anyone out in terms of performance, but they should contribute with the bat, bowl and in the field. Try and put in more energy,” Boult said on the eve of the second one-dayer at the Feroze Shah Kotla stadium on Thursday. India vs New Zealand, 2nd ODI, Preview & Predictions

Boult said that the quality of spin bowling that they encountered during the Test series is something that they are not used to. Asked if Ravichandran Ashwin’s effect is still bothering the Kiwi batsmen, Boult said: “I am not too sure about that. Indians bowled well in Dharamsala to start off. Especially their seamers. They set the tone, managed to get us down to four in first 10 over. What the likes of Ashwin and Jadeja have done, we are not used to in home conditions.”

Boult maintained that the mood in the camp is still upbeat despite failing to register a win in the tour so far. “Obviously it hadn’t gone as we have liked it to be. It’s been a tough learning experience in Test series and a severe defeat in Dharamsala, the other night. The mood in the camp is positive and guys are looking forward to the challenge. Obviously luxury, five-match series, you have four match up for grabs and opportunity to right a few wrongs,” he signed off. 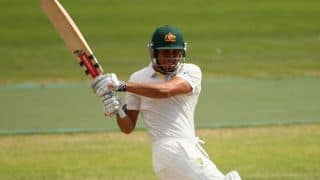 Darren Lehmann: Usman Khawaja can bat at any position