Bayliss contract as England coach ends on September 2019 and will not be extending the same.

On Monday, England coach Trevor Bayliss had called for T20 International matches to be eliminated from the schedule to ease the pressure on players and coaches. In an interview with cricket.com.au, Bayliss added that T20 cricket should be restricted to the World T20 and cricket leagues across the globe. His statement came after England failed to make it to the final of the ongoing Trans-Tasman T20 Series. Bayliss has now put his statement into action by urging ECB to appoint a specialist T20 coach for England. In fact, he already has a candidate in mind: Paul Farbrace, who oversaw England on temporary basis in 2015 after Peter Moores was sacked.

Bayliss wants ECB to appoint a T20 coach before his departure: Eventually you will have specialist coaches as well (as players). That will obviously be a discussion with higher levels, with (ECB Director of Cricket) Andrew Strauss and people like that. If that was what they thought was the way to go ahead, I d be all for it. If not, I am more than happy to keep going and work with these guys towards that next T20 World Cup.

On appointment of Paul Farbrace: Obviously. Paul Farbrace, I think, would do a grand job. If that s a possibility down the line, so be it. We work pretty closely together anyway. When I was a number two, years ago, a bloke said to me the role of the number two is to make the number one look good. I think he s done a good job in that respect. 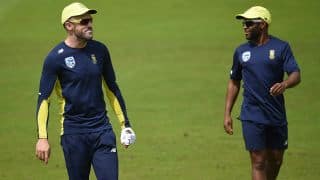