The experienced Hohns, who previously served as chief selector during a hugely successful period for Australia, currently sits on the four-man selection panel along with Mark Waugh, coach Darren Lehmann, and now Chappell.

Desperate times call for desperate measures. After Australian chairman of selectors Rod Marsh quit recently, Cricket Australia (CA) on Thursday appointed Trevor Hohns as Australia’s interim chairman of selectors, with Greg Chappell drafted in as a selector too to help a national team in crisis. The experienced Hohns, who previously served as chief selector during a hugely successful period for Australia, currently sits on the four-man selection panel along with Mark Waugh, coach Darren Lehmann, and now Chappell. CA chairman David Peever said Hohns had agreed to step up to ensure continuity while the search for a full-time chairman is carried out.

“Trevor is highly experienced as a selector, and will ensure we place our best players on the field this summer while we seek a permanent replacement for Rod,” Peever was quoted as saying by an AFP report. On Chappell, Peever said he had been instrumental in restructuring Cricket Australia’s youth pathway programme and had his finger on the pulse of young talent. “His in-depth knowledge of up-and-coming talent in the Australian system will be invaluable,” he said.

Former fast bowler Jason Gillespie and captains Ricky Ponting and Steve Waugh have all been touted as possible successors to Marsh. These developments took place in the wake of Australian team s dismal run across formats, which saw them getting whitewashed in Tests and ODIs in Sri Lanka and South Africa before going down 2-0 in the first two Tests of three-match ongoing series against South Africa at home. Marsh was the first casualty after there were demands for heads to roll.

While spinner Hohns only played seven Tests for Australia in the late 1980s, he had a highly successful previous stint as chairman of selectors. Under his guidance, Australia won a record 16 successive Test matches and claimed the 1999 and 2003 World Cups in a golden era. He rejoined the selection panel in 2014. He will be helped in trying to turn around the team’s fortunes by former Test captain Chappell, who has been drafted in on a temporary basis with a raft of changes expected for Adelaide.

Coach Lehmann had earlier declared only four players — captain Steve Smith, David Warner, Mitchell Starc and Josh Hazlewood — were sure to keep their places after Australia’s second demoralising collapse in the Hobart Test this week. Australia’s team announcement for next week’s third and final day-night Test in Adelaide has been delayed until Sunday so selectors can assess players’ form in domestic Sheffield Shield matches. 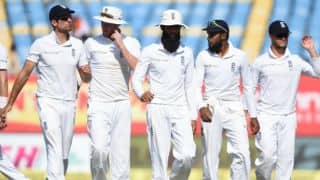