Barbados Tridents won their second Caribbean Premier League (CPL) title as Guyana Amazon Warriors’ perfect season unraveled at the worst possible moment. The Warriors had won all 11 matches including three against the Tridents before the final, but came off second best in the face of an inspired performance from the Barbados outfit.

After Jonathan Carter’s unbeaten 50 off 27 balls led a recovery from 108/6 in the 15th over to an imposing 171/6 from 20 overs, the Tridents bowled and fielded for their lives to defend the target by 27 runs and break the Warriors’ hearts at the last, Raymon Reifer leading the way with remarkable figures of 4/24 from his four overs.

While the Tridents celebrate a well-deserved and comprehensive victory, the Warriors are left to reflect on a fifth CPL final defeat in seven years. This will perhaps be the toughest to take of all given the flawless season that had preceded it.

Chandrapaul Hemraj, apparently struggling with a hamstring injury, could have been run out twice before he was caught at short third-man off Reifer for just a single and things got worse for the Warriors when Shimron Hetmyer holed out to long-on for just 9 to give Reifer a second wicket.

Shoaib Malik then smashed a long-hop from leading 2019 CPL wicket-taker straight to Reifer on the midwicket boundary to leave his side in real trouble at 53/3. When Brandon King yorked himself and was smartly stumped by Shai Hope off Ashley Nurse for 43, the game had swung decisively the Tridents’ way.

Nicholas Pooran raced out of the blocks with two fours and a six, but Nurse and death-bowling specialist Harry Gurney strangled the life out of the Warriors’ run-chase. Just eight runs came from three overs after the loss of King, and it felt like something simply had to give as the required rate spiraled north of 14 per over.

Sure enough, Pooran went after Nurse but only managed to pick out Alex Hales at long-on to leave the Warriors needing a miracle. Sherfane Rutherford hit back-to-back boundaries off Gurney but then failed in the daunting task of trying to clear Jason Holder at long-off.

Reifer returned to take his third wicket when Romario Shepherd cue-ended a full, wide delivery through to Hope, and Keemo Paul’s 14-ball 25 was entertaining but futile. He, like Rutherford, fell to the hugely impressive Gurney having failed to get the ball over Holder. Reifer finished things off in the final over, having Chris Green caught behind for his fourth wicket and getting out of the over without any bother as the Tridents’ celebrations began.

Hales and Johnson Charles had earlier got the Tridents innings off to a fine start before the England opener skied one high to midwicket where King steadied himself and made a tough catch look easy as Shepherd struck in his first over. Phil Salt, the England prospect who flew in at the last minute as an injury replacement for JP Duminy, fell soon after, given out caught behind attempting to pull a Ben Laughlin slower ball.

Charles took up the charge and was absolutely flying when he became Imran Tahir’s 16th victim of the tournament. It was a wicket the Warriors desperately needed, Charles having plundered four fours and a six in his previous eight balls before Tahir’s extra bounce induced a top edge. The Tridents then wobbled for the only time in the match. Shai Hope was smartly caught by Hemraj at midwicket off Paul before the vastly experienced duo Jason Holder and Shakib Al Hasan were both run out in the space of three overs.

Paul’s rocket arm from the deep was key to both dismissals as Holder attempted a bold second run and Shakib was sent back having considered the same. It was the Jonathan Carter show from there on in, though, as his second CPL 50 propelled the score to a total beyond the Warriors.

From 108/6, Carter led the Tridents’ charge as 63 were added without loss from the final 31 balls of the innings. His four Maximums were all sweetly struck, the first three of them straight back down the ground and the fourth high over midwicket. Ashley Nurse so integral to the Tridents’ win over Trinbago Knight Riders in Qualifier 2 joined in late in the piece with a six and a four of his own as 45 runs came from the last three overs. 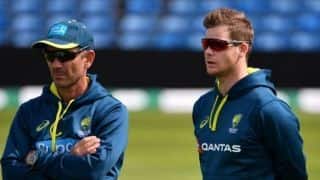 Smith's return to captaincy is something we'll have to work out over time: Langer