Trinidad and Tobago Red Steel beat the defending champions of the Caribbean Premier League (CPL), Jamaica Tallawahs, by 13 runs at the Queens Park Oval, Port-of-Spain. With this victory, Jamaica’s unbeaten streak in this tournament came to an end. Red Steel were led by Evin Lewis’ belligerent half-century, as they posted 183 on the board. Though Chris Gayle scored a fifty, Jamaica finished at 170 for six.

Gayle won the toss and elected to bowl. Kevin O’Brien started in great fashion and smashed 32 off 21 balls before being yorked by Andre Russell. Ross Taylor fell for a duck when Rusty Theron pulled off a great catch. From there on, Lewis took control and smashed the bowling quite easily. In one of the overs, Daniel Vettori was smashed for three sixes. Jamaica were not helped by some poor fielding, though Russell did pull off a remarkable save on the boundary.

Darren Bravo scored a run-a-ball 30, but Dwayne Bravo and Javon Searles took Red Steel to 183 with some late hitting.

Jamaica lost Chadwick Walton early, but after that, Gayle and Jermaine Blackwood took control and put up a 76-run partnership. In the 12th over, they had reached 97 and were looking on course, before O’Brien struck to remove Blackwood. O’Brien struck again 15th over by dismissing Gayle and then got Adam Voges next ball. Later, he also dismissed Owais Shah to complete his five-for as Jamaica fell to a defeat.

Russell continued to fight though and he finished unbeaten on 40 off 17 balls, with five sixes to his credit. This victory has now taken Red Steel to the top of the table.

Man of the Match: Kevin O’Brien. 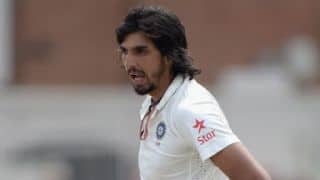 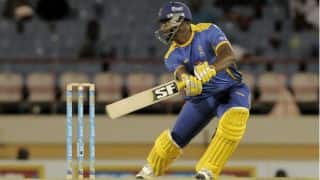