Denis Compton was one of the most prolific batsmen for England, having played 78 Tests at a batting average of 50.06. He played for Middlesex his entire First-Class career. His grandson, Nick Compton, has played nine Tests for England and has not only played for Somerset, but Middlesex also.

Nick is currently playing for Middlesex in the County Championship. Batting with him is Neil Dexter. Neil Dexter’s nickname is Ted. Denis Compton: The knight in shining armour of English cricket

Ted Dexter, also known as Lord Ted, was a champion batsman, playing 62 Tests for England and finishing with a batting average of 47.89. He also captained England. Dexter played for Sussex from 1957 to 1968. He also led Sussex and later on became the President of the club. Ted Dexter: One of the most colourful characters to grace English cricket

However, Neil Dexter is not related to Ted Dexter. Neil is a South African-born cricketer, who has played for Kent and Essex. He currently plays for Middlesex. He was Kent’s Kolpak cricketer.

Nick Compton was dismissed for 30 in the Middlesex vs Sussex match. He was caught by Michael Yardy as Oliver Robinson took the wicket.

Incidentally, Denis Compton and Ted Dexter have played together for International Cavaliers against Jamaica in 1963-64.

In the second match, Compton scored 11 and Dexter scored 120. Compton returned to pick up three wickets in Jamaica’s second innings. 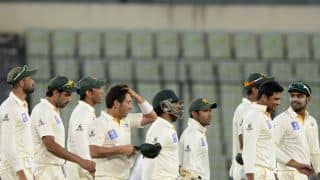