Jonathan Trott's run-scoring feats during the past 12 months were recognised when he was named England's cricketer of the year by the England and Wales Cricket Board (ECB) at a ceremony at Lord's on Wednesday. 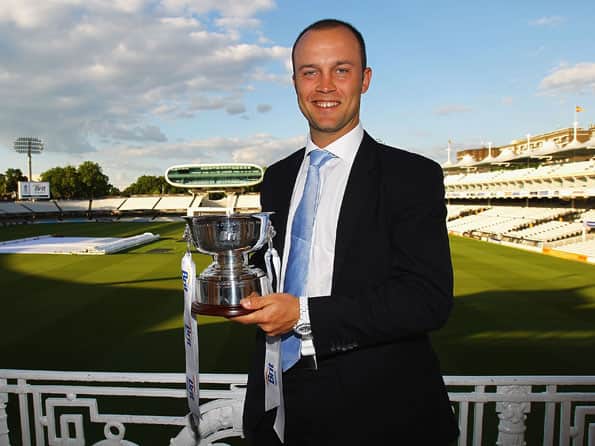 Jonathan Trott’s run-scoring feats during the past 12 months were recognised when he was named England’s cricketer of the year by the England and Wales Cricket Board (ECB) at a ceremony at Lord’s here on Wednesday.

The award, voted for by the British cricket media, is given to the player who has had the greatest impact upon England’s performances from the start of the 2010 international season until the end of the World Cup.

This included seven hundreds and a highest score of 226, against Bangladesh in a Test at Lord’s last year.

His Ashes average of 89 was second only to Alastair Cook, whilst his first over run out of Simon Katich during the second Test Match in Adelaide, helped set England on the road to Ashes victory.

“I am both extremely humbled and proud to have been named England Cricketer of the Year after what has clearly been the most enjoyable year of my cricketing career so far,” Trott said.

“It is an honour to represent England and it has been a privilege to be involved in such a successful, hard working team,” the 30-year-old Warwickshire batsman added.

“I wouldn’t have won this award without the commitment and support of my team mates. This award really belongs to the entire England squad and management team that have provided such a supportive and professional environment that has allowed me to prosper as a cricketer and a person.

“There is still much hard work to be done and improvement to be made and I look forward to making further contributions to a successful England team for a long as possible.”

Trott’s good form continued with 203 during England’s recent innings win in the first Test against Sri Lanka in Cardiff.

That left him with a Test average of 66.67 — second only to that of Australia great Sir Donald Bradman’s mark of 99.94 among batsmen who’ve played at least 20 Test innings.

Sri Lankans are on their own now: Muralitharan