Defending 11 runs, Bumrah bowled a no-ball and wide in his first three deliveries but displayed brilliant variations of slower deliveries including a few in the blockhole as Aaron Finch and Brendon McCullum could manage only six runs.

Jasprit Bumrah produced one of the finest death overs in the history of Indian Premier League as Mumbai Indians nearly committed harakiri before edging out Gujarat Lions in a thrilling Super Over finish. Chasing a modest target of 154, Mumbai Indians were cruising along at 104 for 2 in 13 overs and then 127 for 4 in 16 overs. An inspired spell by James Faulkner (2/34) and Basil Thampi (3/29) coupled with Ravindra Jadeja‘s brilliance in the field saw Mumbai Indians nearly pull off a defeat from the jaws of victory. FULL CRICKET SCORECARD: GL vs MI, Match 35

There were four run-outs including three in the last seven balls as Mumbai Indians were all-out for 153 off the final ball. The One Over Eliminator saw Mumbai Indians score 11 with Kieron Pollard hitting Faulkner for a boundary and a six. Defending 11 runs, Bumrah bowled a no-ball and wide in his first three deliveries but displayed brilliant variations of slower deliveries including a few in the blockhole as Aaron Finch and Brendon McCullum could manage only six runs. Each of his deliveries were unplayable proving why he is an asset fpr the Indian team in limited overs format.

The seventh win took them to 14 points and on par with Kolkata Knight Riders. One more victory from the remaining five games will seal their spot in the last four. For Gujarat Lions, the sixth defeat in nine matches further diminished their chances of qualifying for the next stage.

Here are some reactions from social media over this thrilling contenst.

Game of the tournament. #gunsuperover #IPL

What a great game of cricket. Congrats @mipaltan bad luck @TheGujaratLions both teams were outstanding.

Amazing again, IPL!!!! What skills from Booooomrah, brilliant super over!!!

Bumrah bowling the Super Over ahead of Malinga. That’s #IPL coming of age…baton has been passed on officially. Performance over reputation 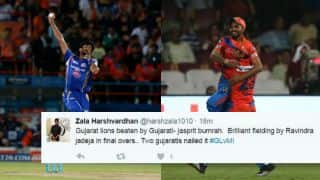