India have yet again dominated over their opponents in the semi-final as they defeated Pakistan by 203 runs to enter World Cup final.

India have yet again dominated their opponents in the semi-final, as they defeated Pakistan by 203 runs to enter ICC Under-19 World Cup final. Electing to bat, India posted 272 for 9. The chief architects for India’s win were Shubman Gill who scored an unbeaten 10 and Ishan Porel who claimed 4 for 17. Pakistan were bundled out for 69 under 30 overs.

The India U-19 team was praised by the fans and cricket pundits on Twitter, as they entered their sixth final in their U-19 World Cup chronicles.

That was brutal. What a win for our boys, thoroughly out playing Pakistan. Best wishes for the finals #INDvsPAK #U19WorldCup pic.twitter.com/Ij4HWfAJnk

Far superior performance than any side in the tournament. Congrats #TeamIndia. Just one step away from a huge milestone. The opportunity to play in a world cup final does not come everyday.. so, make the most of it. #INDvPAK pic.twitter.com/S0nlUXxuc8 Suresh Raina (@ImRaina) January 30, 2018

Congratulations to the India U19 team. What a win against Pakistan they’ve played like real champions. Win the final now! #INDvPAK #U19WC Yusuf Pathan (@iamyusufpathan) January 30, 2018

What an incredible performance by the Under 19 boys. Mighty impressed with the fielding and not giving Pakistan even an inch. As comprehensive as it gets. Best wishes for the finals #INDvPAK VVS Laxman (@VVSLaxman281) January 30, 2018

This is as comprehensive a win as is possible in a semi-final of an ICC tournament. A lot of the Indian boys look ready for this level. #ICCU19CWC Harsha Bhogle (@bhogleharsha) January 30, 2018

Much deserved 100 for #ShubmanGill superbly played. India will believe they have enough. Pak fielding horrible I must say. #INDvPAK #U19WC

#INDvPAK Woohoo… Can we call it Champions Trophy Final’s Revenge? No it’s more than that. Congratulations Indian U19 for Finals.@BCCI #ICCU19WorldCup

Top Inn by our own lad #shubmanGill in U-19 India vs Pakistan World Cup semi final..so proud of you..keep going guys.. Cup Jeet kar aana hai.. All the best for the finals #Rahuldravid one more game guys

India will face Australia in the final on February 4. India have defeated Australia in their first match by 100 runs. Both the teams have won the U-19 World Cup thrice respectively. 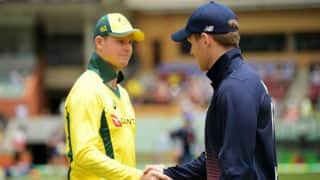