The team will be once again led by Virat Kohli with his deputy Ajinkya Rahane.

After winning the home Test and One-Day International (ODI) series against New Zealand, Indian cricket team will continue their long season by playing against England. This Test series will began from November 9 at Rajkot. Both the teams will play total of five Tests and ahead of his important series; Indian selectors have selected the squad with few expected changes. Comeback man Gautam Gambhir is once again back in the Test side along with Ishant Sharma, who missed the previous series because of suffering from Chikungunya. This series is named after former Indian cricket administrator and one of the founders of Board of Control for Cricket in India (BCCI). ALSO READ: India announce squad for 5-Test series vs England; Pandya, Jayant included while Gambhir, Nair retained

England last visited India back in 2012 and surprisingly won the series by 2-1. They are the only team to beat India in India in last 10 years. India will look to take the revenge of previous series defeat. Ahead of this series, because of few injured players, selectors have selected the squad for only first two Tests with two surprising inclusion. The surprising inclusion is none other than Hardik Pandya and Jayant Yadav, who recently made their ODI debut against New Zealand. Opener Shikhar Dhawan along with Rohit Sharma and Bhuvneshwar Kumar has been left out because of injury.

The team will be once again led by Virat Kohli with his deputy Ajinkya Rahane. With the squad for first two Tests being announced, here are some of the reactions from social zone over this news.

I would like to take this opportunity to thank all my supporters, family members & the selectors for having faith in me.#INDvENG

To be part of the Indian Test squad is a dream come true for me. pic.twitter.com/OZUFAHo97p

Ishant Sharma back into the squad for #IndvEng test, Now I am expecting Firangis to give our Kohinoor back for this kind gesture.

Selectors have given a great vote of confidence to @hardikpandya7

The trip to Australia has indeed changed his fortune

I would be happy to be proven wrong but don’t think Hardik Pandya is a Test material. Waste of a place. https://t.co/8lP5MILB01

No Rohit, fine. How the hell did HARDIK make it to the squad? #INDvENG

Welcome back Ishant Sharma. Great chance for Hardik Pandya to prove himself and Gautam Gambhir surely in the XI. #INDvENG

India is currently at top of ICC Test rankings and will look to retain it by winning this series. 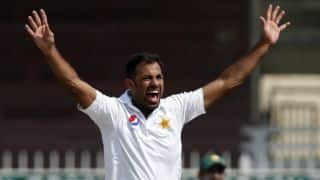