Arjun Tendulkar was the star of Mumbai’s dominating show against Gujarat as they registered a nine-wicket win in the U-19 Vinoo Mankad Trophy 2018-19 at the Kholvad Gymkhana Ground in Surat on Saturday.

Arjun ran through the Gujarat batting line-up to finish with figures of 5/30. They were bowled out for 142 and opener Suved Parkar’s unbeaten 67 guided Mumbai to a comfortable win, as they made 143/1 in 38 overs.

Arjun, son of batting legend Sachin Tendulkar, made impact in the very first over of the match after captain Vedant Murkar opted to field. He bowled Gujarat opener Vardhaman Shah (0) off the second delivery of the first over. He then had Priyesh Kumar (1) and LM Kochar (8) out caught behind in his successive overs to leave their opponents tottering at 16/3 in 7 overs.

A half-century from No. 6 Umang, who scored 51, took Gujarat to three figures. However, Arjun returned in the final overs to add two more scalps to his tally to complete a five-wicket haul.

Gujarat’s senior team coach Vijay Patel was there to watch the game and showered praises on the 19-year-old Arjun for his superb bowling performance. “Arjun bowled very well. He deserved the five-wicket haul. He bowled a brilliant spell,” Patel was quoted as saying by The Times of India on Sunday.

He further added, “I am not saying good about him just because he is the son of Sachin Tendulkar. I had seen him bowl some three to four years back when he had come with the U-16 team in Ahmedabad. He has improved vastly. He has also gained some valuable experience after his stint with the U-19 Indian team.” 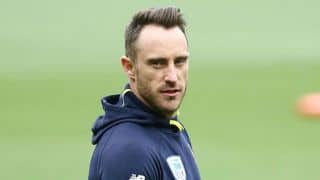