Jurel dropped the ball to cover-point and took off for a run, only to realise that non-striker Ankolekar was ball-watching and he did not respond. India Under 19 batsmen Dhruv Jorel and Atharva Ankolekar found themselves in a bizarre situation during the U19 World Cup Final against Bangladesh U19 at Potchefstroom on Sunday.

The incident took place in the 44th over, when the two Indian batsmen found themselves at the same end and wicketkeeper-batsman Jurel had to depart.

Jurel dropped the ball to cover-point and took off for a run, only to realise that non-striker Ankolekar was ball-watching and he did not respond. Both the batsmen found themselves at the non-striker’s end.

Shamim Hossain, who was at cover-point picked up the ball and lobbed the throw to the keeper, who took the bails off.

The umpires were confused about who had to depart and hence went upstairs. The third umpire who had the benefit of the replays took a closer look and gave Jurel out.

For the second time in a week, we’ve seen both batsmen end up at the same end!

Meanwhile, India, who were put in to bat first by Bangladesh were bundled out for 177 in 47.2 overs. India opener Yashashwi Jaiswal top-scored with 88 runs.

This is the first instance in 13 games that India had been bowled out in the tournament.

For Bangladesh, Avishek Das was the pick of the bowlers finishing with figures of 3/40 while Tanzim Hasan Sakib and Shoriful Islam chipped in with a couple of wickets each. 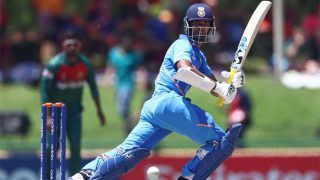