Currently, UAE are 72 for the loss of six wickets in 20 overs with Amjad Javed on 27.

Minnoes, UAE aim to finish on a big total following the fall of six quick wickets against former two-time world champions, West Indies, in their final group stage clash of Pool B, match 41 of the ICC Cricket World Cup 2015 at the McLean Park in Napier on Sunday. Currently, UAE are 72 for the loss of six wickets in 20 overs with Amjad Javed on 27 and Nasir Aziz on 11. Live Updates: West Indies vs UAE 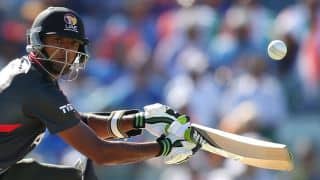