The expat-driven squad hope to capitalise on their lowly status although the odds are stacked against them.

Dubai: Skippered by a 43-year-old and with a 15-man squad featuring nine players over 30, the United Arab Emirates (UAE) believe their status as no-hopers could work in their favour at the ICC Cricket World Cup 2015. The last of the 14 finalists to book their place at the showpiece event, the Gulf side are playing in just their second World Cup and first since 1996.

Now, two decades on, the expat-driven squad hope to capitalise on their lowly status although the odds are stacked against them with defending champions India, 1992 winners Pakistan, two-time champions West Indies and favourites South Africa all in their group.

Realistically, the best the UAE — whose players are all part-time and drawn mostly from Pakistan and India — can hope for is to try and scratch out a result against Zimbabwe and Ireland, their opponents in their first two games.

Mohammed Tauqir, one of just three Emirati-born players in the squad, has been installed as captain replacing fellow 43-year-old, Pakistani Khurram Khan who had led the side for six years. Tauqir has played in 50 international matches, but just five ODIs. On his ODI debut, in the 2004 Asia Cup against India, he scored 55 off 73 balls and claimed 1-46 with his tidy right-arm off-spin.

“If we put on a good show against Pakistan and India, that would be the icing on the cake,” said Tauqir, who has seen cricket develop in the Gulf state from a sport played on concrete wickets on waste ground to international arenas in Dubai, Abu Dhabi and Sharjah. “We are also targeting one or two wins. It’s a challenging but a realistic target. These players are capable of causing an upset.”

Khurram Khan, who hails from Punjab and was born on the same day in 1971 as the captain, will be key to his team’s chances. Vice-captain Khurram has played 10 ODIs in his 11-year career but boasts an average of 53.37, a figure boosted by his undefeated 123 in a six-wicket win over fellow World Cup qualifiers Afghanistan in Dubai in November.

The UAE won that series 3-1. Khurram’s score allowed him to surpass Sanath Jayasuriya as the oldest ODI centurion in the history of the game. The UAE are coached by former Pakistan fast bowler Aqib Javed, who played in the 1992 World Cup winning team.

His input will be crucial for a side expected to struggle on the hard, bouncy pitches, particularly in Australia.

Former Ireland captain Trent Johnston, who knows how to engineer a World Cup shock after his side defeated Pakistan in the 2007 tournament, believes the UAE attack will toil. “The bowling is a concern with only one true paceman in Mohammad Naveed,” said Johnston. “However, Manjula Guruge will swing the new ball and bowl well at the death.” 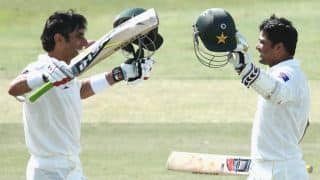