The live cricket streaming of UAE vs Ireland, Desert T20 2017, Group A, Match 9 is available on skysports.com.

Hosts United Arab Emirates (UAE) take on visitors Ireland in the Group A, Match 9 of the ongoing Desert T20 2017, at the Dubai International Cricket Stadium on Wednesday. The live cricket streaming of the match is available on skysports.com, while the live telecast is available on Sky Sports in UK. The tournament has generated a lot of craze among the cricketing fans, and with eight teams competing in the shortest format of the game, it has become even more crazier. In this tie, both hosts and visitors would aim for a win here, as the winner could possible be at the top of the group table, with currently UAE being on second, followed by Ireland on third.

The eight teams are divided in two groups of four teams. Group A includes Afghanistan, Ireland, UAE and Namibia, while teams of Group B are Oman, Scotland, Netherlands and Hong Kong. The fixtures of the tournament were confirmed by the Emirates Cricket Board earlier in December 2016. Two teams from each group will qualify to semi-finals. The semi-finals and final of the tournament will be played on same day on January 20 at Dubai International Cricket Stadium. Since the tournament is played at UAE s home venues, they will have the advantage.

Afghanistan beat UAE by 5 wickets in Match 6 of the Desert T20 Challenge 2017 at Abu Dhabi on Tuesday. With this win, Afghanistan go to the top of the table with 4 points from 2 matches. While Ireland made a good comeback in the game against Namibia on Tuesday, restricting the opponent to a gettable total, chasing down the target of 147 with 2 balls remaining. With this, Ireland registered their first victory in the tournament and remain alive in the tournament. 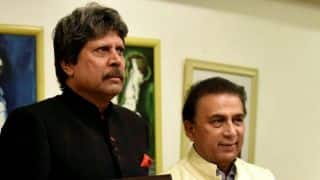