Umar Gul has not been a regular in the Pakistan team since 2013 and 2014 as he had a knee injury to deal with.

Pakistan pace bowler Umar Gul has hit out at the selectors for leaving him out of the squad for the team’s tour of England. Gul was not named in the final squad that left for England a few days back and was alos not among the players that were called up for a national training and skills camp which was held in Abbottabad and Lahore. He has not been a regular in the Pakistan team since 2013 and 2014 as he had a knee injury to deal with, apart from the recovery process following his surgery in Australia. The selectors were upset about his outburst but have urged him to stay in contention by playing in domestic cricket. ALSO READ: Umar Gul expresses hope to be back playing for Pakistan, on Twitter

A clearly frustrated Gul said – “Look, I’m not saying that they should play me,” Gul said. “But at least treat my case on the same level as of others. Usually, it’s not in my nature to speak out my mind. But when people start rating me as a discard then it hurts a lot. I have had fair share of injuries during my long international career. Just tell which fast bowler doesn’t get injured? This is part and parcel of cricket,” as quoted by espncricinfo.com.

He continued saying – “However, some people [in the cricket board] make you a fool by jumping to the conclusion that so and so individual’s playing career at the international level is over. And what is more annoying is that when you confront them they’ll act as if nothing has happened and will try to be as supportive as they can but the same people will form different opinion behind your back.” ALSO READ: Pakistan vs England 2016: Umar Gul unhappy following snub

Gul feels that he was fit according to the criteria set by the Pakistan selectors prior to the World Cup in Australia, but was surprised at his omission from the squad.

Gul said – “I was aghast when I found out that the parameter for fitness for the 2015 World Cup was set at 60 points. And yet I was not good enough to be considered [for selection] despite recording 62 points. Somebody in the PCB must be honest enough to explain this double-standard policy.”

He added – “Now I realize that sometime just being fit is not enough to be inducted because the trust is not there. Being the senior-most fast bowler, there was no way they [selectors] could have sidelined me the way they did. They were not willing to trust me as a player. In the last season I had rediscovered my rhythm and felt extremely fit to reclaim my Pakistan spot, but the selectors still chose to ignore me.”

Although, Inzamam-Ul-Haq, Pakistan’s chief selector, didn’t comment on Gul’s exclusion from the squad, Tauseef Ahmed, a member of the selection panel did voice his opinion. He said -“He shouldn’t be giving statement, rather focusing on his cricket and keep on performing. Cricket season has just started and he shouldn’t be disheartened as there are a lot of series ahead and it’s not just about Umar Gul but every player who didn’t make into the Test side.”

He further added – “You obviously can’t select everyone at once but we are completely aware about who is dropped and who is selected. Junaid Khan is the other bowler who was left out and he along with Umar was also in contention. But we have our reasons, which are not unfair, and the selected bunch was the best we could possibly pick according the the conditions and competition.” 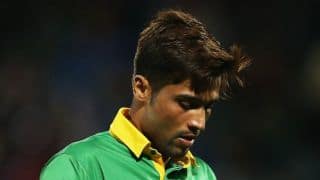