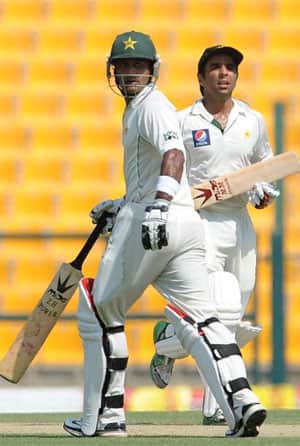 The left-hander made an undefeated 109 and added 118 for the opening wicket with Hafeez and another unbroken 141 for the third wicket with Azhar Ali (60 not out) as Pakistan reached 259/1 by stumps, a lead of 62 with eight wickets intact.

If it was Pakistani bowlers’ day, with Junaid Khan taking five wickets, on Tuesday it was batsmen’s turn on Wednesday who further blunted an ordinary looking Sri Lankan bowling attack.

Umar, Hafeex and Azhar batted without any trouble on an unresponsive pitch to frustrate the Sri Lankans who remained in a search for an elusive wicket in the first and thrid session.

Azhar, who completed his tenth fifty in his 14th Test, ably supporting Umar.

It was Umar who edged Herath towards third man for a couple to take Pakistan past Sri Lanka’s first-innings total of 197.

The ease with which Pakistani batsmen were coping, Sri Lankan captain Tillakaratne Dilshan immediately took the second new ball in the 81st over as their only chance to stage a fightback.

But even that did not bring any luck for the Islanders as Umar hit three boundaries, two off Suranga Lukmal and then glaneced the same bowler for a single to bring up his hundred off 259 balls.

Sri Lanka spurned a chance to get Azhar out, when experienced Mahela Jayawardene dropped a catch in the slips off Herath when the right-hander was only seven.

Earlier it was Hafeez who anchored Pakistan’s innings after they resumed at 27/0.

Hafeez hit eight boundaries and a six during his confident knock.

Umar reached his 12th half-century with a sharp single, and has so far hit only three boundaries as Pakistan scored only 59 in the second session.

Umar was more cautious as Sri Lanka introduced spinners Rangana Herath and Tillakaratne Dilshan from both ends. They bowled four maiden overs between them with tight line and length, but did not get much turn.

Hafeez then broke the deadlock in scoring, jumping out of his crease to hit Herath over long-off for a six and then slashed towards third man to bring his fifth Test half-century.

He then swept the same bowler for two to bring up Pakistan’s 100. Hafeez has so far hit eight boundaries and a six during his 121-ball knock.

Sri Lanka’s three-pronged pace attack and spinners failed to give any trouble to the Pakistani openers on a pitch which had some grass on the first day.

The remaining two Tests in the series will be played in Dubai (October 26-30) and Sharjah (November 3-7). The Tests will be followed by five one-day and a Twenty20 international.

The series was shifted to United Arab Emirates after Sri Lanka refused an invitation to tour Pakistan over security fears. (AFP)