Taufiq Umar approached his maiden double hundred as Pakistan piled on the agony for Sri Lanka by taking their lead past the 200-mark on the third day of the opening Test here on Thursday. 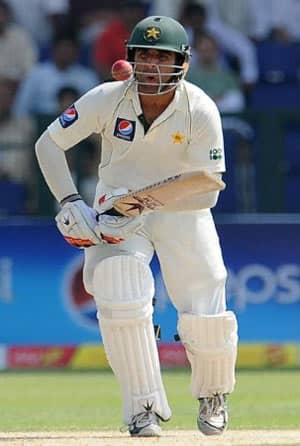 Taufiq Umar approached his maiden double hundred as Pakistan piled on the agony for Sri Lanka by taking their lead past the 200-mark on the third day of the opening Test here on Thursday.

Pakistan, replying to Sri Lanka’s modest first innings total of 197, progressed to 439-4 by tea on the third day at Abu Dhabi stadium, lifting their lead to 242 with six wickets in hand.

The 31-year-old left-hander is just seven short of his double hundred, having batted over ten hours after opening Pakistan’s innings in the final hour on the first day of the match.

At the break, the other unbeaten batsman was Asad Shafiq with one.

Umar, who has been rock solid, has so far hit 15 boundaries during his 452-ball marathon innings.

Skipper Misbah-ul Haq, who upped the tempo with a 52-ball 46 with four boundaries and a six, fell caught behind to left-arm spinner Rangana Herath just before tea. Herath has taken 2-110.

Pakistan, who resumed at the overnight score of 259-1, lost Azhar Ali (70) and Younis Khan (33) in each of two sessions, but both ably supported the stubborn Umar through some solid batting.

The overnight pair of Umar and Ali extended their second wicket stand to 160 as they again remained unflappable on a pitch that gave little response to pace and spin bowlers.

Ali, who has 10 half centuries in 14 Tests now, yet again failed to register his maiden hundred as he came late on a swinging delivery which uprooted his off-stump. Ali struck six boundaries.

Younis had a shaky start as he was beaten by Welegedara first ball and was then dropped by Prasanna Jayawardene off skipper Tillakaratna Dilshan when a leg-side edge was dropped by the wicket-keeper despite getting two attempts.

Umar, 31, remained steady as he hit a glorious boundary off Suranga Lakmal and then took a single off Herath to go past his previous best score of 135, made on two occasions.

He hit 135 against South Africa at Cape Town in 2003 and repeated that score against the West Indies at St. Kitts earlier this year.

Younis was trapped leg-before by paceman Chanaka Welegedara after scoring 33, having added an invaluable 82 for the third wicket with Umar.

Misbah added a quickfire 76 with Umar for the fourth wicket.

The three-Test series is played at the neutral venues of United Arab Emirates after Sri Lanka turned down an invitation to tour Pakistan over security fears. (AFP)